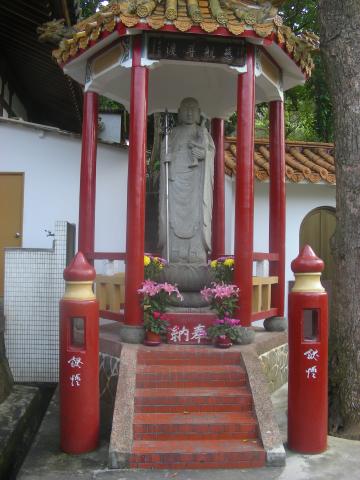 The popular image of multi-culturalism as a mosaic, a salad bowl in which different cultures mix but keep their integrity, is misleading. Cultures are more like soups, flavored with many ingredients, some identifiable. –From the book ‘Cultures and societies in a changing world,’ written by Wendy Griswold.

Taiwan has a long history of diasporas and colonization. Even the so-called ‘aboriginal people’ in Taiwan drifted there several thousands years ago. About four hundreds years ago, many Han Chinese from China migrated to Taiwan and changed the aboriginal culture.

Japan had colonized Taiwan from 1895 to the end of WWII. In 1949, the government of Republic of China lost its former territory following the Chinese civil war and moved to Taiwan. Therefore, it is not surprising that we can see Japanese-style Buddha statue in a Han’s religious building, which was rebuilt after 1949.

In the 17th century, the Spanish and Dutch ruled Taiwan shortly, and the exposure to the western culture seems to influence the decorations in traditional Han’s religious building.

There is another flavor added to the religious buildings in Taiwan: modern. Decades ago, some fishermen picked up several damaged god statues and set up a temple for them. However, where they set up this temple became a park and the government asked them to move the temple. Because they do not have other place to set up the temple, they can only move the temple when the policemen came. At the end, the government decided to let the temple stay, but due to the possibility of flooding, the temple is designed to be able to be raised up when needed (along the four pillars around the temple).