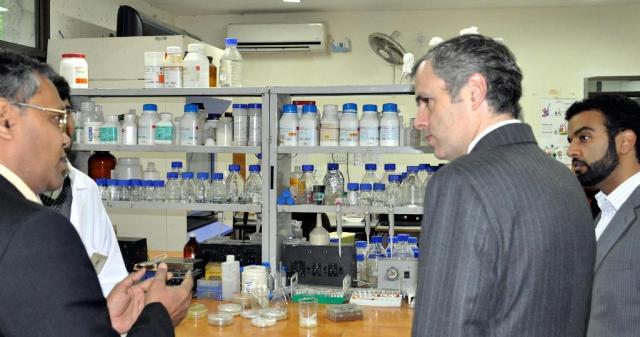 Jammu, January 17 (Scoop News) – Pinpointing the uniqueness of Jammu and Kashmir in its bio-diversity and human resource talent, Chief Minister, Omar Abdullah Tuesday stressed on utilizing this advantage to make the State a scientific hub in the field of research and  development.

“This richness of the State could be well harnessed for generation of wide-ranging economic activities and employment”, he said emphasizing the need for a proper policy environment to give fillip to the scientific knowledge in the State.

Chairing the first meeting of Scientific Advisory Committee to the Chief Minister (SAC-CM) at Indian Institute of Integrative Medicine (IIIM) here, the Chief Minister said that lagging behind in the growth of science and technology despite having the potential can be largely contributed to the non-existence of a befitting policy in this sector.

“The Advisory Committee have an important role to play in helping the State to concretize the initiatives and formulate a policy that can be implemented to utilize the bio-technology and bio-diversity potential for economic welfare and employment generation in the State”, he said.

The Chief Minister said that the bio-diversity and human resource available in the State need to be capitalized in building the block of scientific research and development and making use of it for inclusive development. “We have taken initiatives in the field of industry and entrepreneurship development sectors to generate employment but there is need to utilize IT and ST initiatives for giving fillip to the production of ‘high value low volume’ products in the State”, he said referring to the initiatives Council of Scientific and Industrial Research (CSIR) of India has taken for the development of leather industry in the Valley.

Omar Abdullah said that Jammu and Kashmir is the highest consumer of mutton in the country and adequate raw material for leather industry is locally available in the shape of sheep skin. “We are not utilizing this advantage for wealth and job generation”, he said stressing on exploiting this and similar other kinds of potential available in the State.

The Chief Minister said that the time has come when research initiatives take place locally and the State’s available platform is used to make a sound start. “Gone are the days when we used to copy the product, change its name and sell in the market”, he said adding that India is now exploiting its own potential and scientific knowledge in the fields of science and technology are harnessed to create indigenous products especially in pharmaceuticals and other fields. “Jammu and Kashmir has also to move in this direction and make necessary dent”, he maintained.

Omar Abdullah lauded the efforts of IIIM in making remarkable forward movement in the field of research and production of new bio-molecules through latest studies and bio-technological methods. He said the presence of research scholars from all four corners of the country and three regions of the State in the institution speaks of its fame, recognition and reputation. “I was amazed to see the status of high profile research work being conducted in the institution”, he added.

The Chief Minister asked the Advisory Committee to constitute a smaller group and formulate some concrete proposal to be incorporated in the overall policy of the State aimed at the growth of science and technological research and development in the State. He also proposed creation of two provincial science museums in the State to nurture the natural curiosity of students in scientific knowledge.

Minister for Science and Technology, Aga Syed Ruhulla highlighted the role of scientific knowledge in the holistic development of the State. He presented resume of the steps government has taken under the leadership of Chief Minister, Omar Abdullah to strengthen the Department of Science and Technology and provide a sound base for its flourishing.

Aga Ruhulla said that his department is encouraging students to take science subjects and prove their mettle in the fields of scientific knowledge and technology. “We are providing scholarships to the students from 10+2 onwards to help them carry on successfully their journey to achieve scientific goals”, he said adding that science congresses are being held twice every year to give boost to the scientific temperament in the State.

Chairman of the Advisory Committee, Prof. V. L. Chopra former Director General ICAR and former Member of Planning Commission in his opening remarks gave overview of the significance of scientific research for the economic development and employment generation in the State. He also presented a vision document for harnessing bio-diversity and bio-technology for progress of Jammu and Kashmir.

Co-Chairman of the Advisory Committee, Dr. T. Ramaswami who is also Union Secretary for Department of Science and Technology briefly discussed the measures taken by his Ministry to apply the IT and ST initiatives in the State for inclusive development.

The Chief Minister visited various units in IIIM Complex, Jammu and laid foundation of Experimental Animal House for Drug Discovery in the Complex.

Apprising the Chief Minister of the significant research activities being conducted in the institute, the Director IIIM Dr. Ram Vishwakarma said that the Institute has produced low toxic and high efficient form of drug ‘Risorine’ being presently practiced by the medical fraternity for management of tuberculosis. “We have incorporated herbal molecule extracted from pepper into the Rosorine drug to reduce its toxic effect and make it safer for long time use”, he told the Chief Minister.

The Director also said that the institution has produced drugs with low toxicity for the treatment of hyper-tension and breast cancer. He said Jammu and Kashmir is the only State in the World which produces basic drug element ‘texas beccata’ for management of cancers. He said the IIIM, Jammu has one of the four highly technical laboratories in the country to handle microbes and conduct researches.

Dr. Vishwakarma informed the Chief Minister that the Institute has produced vegetarian form of DHA and supplied its formula to various companies. He said Jammu and Kashmir is supplying products from the IIIM institute to 11 states of the country including Tamilnadu, Hydrabada, Andhra Pradesh and Maharashtra.

He said three facilities of Nuclear Magnetic Resonance Spectrometer (NMR) each valuing Rs. 2.50 crore have been installed in the institute to conduct chemical structuring of molecules. He said menthol (a mint product) is now being synthesized in the institute and a new form of organic micro nutrient has been evolved which is applied to the agriculture crops by sprinkling on the leaves and branches as a bio-fertilizer.

Dr. Vishwakarma in a PowerPoint presentation said that under the Prime Minister’s National Innovative Council initiative CSIR-IIIM has formulated a proposal to focus on the development of Pharma Industry in Jammu and Aroma Industry in Kashmir. “We have already taken measures in this direction to harness the available potential of the State in these fields”, he added.