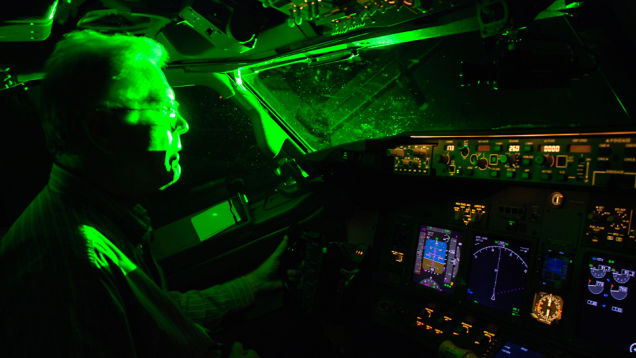 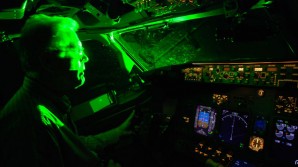 Aircraft cockpit illuminated by green laser light can blind or spellbind a pilot.

Top level Taliban commanders recently discussed the possibility of using high powered laser and laser pointers at fighter aircraft and helicopters in Afghanistan”, according to confidential source in Pakistan.

They discussed in some detail “how best to deploy and use lasers in the field in planned attacks against commercial and military aircraft/airports.”

How their fighters “could best use lasers and point them at aircraft while they are at low altitude or preparing to land or take off”. You should be “in line with the airports final approach path, when you illuminate the cockpit,” said one Taliban technical and science adviser.

They even discussed what types of lasers to buy and agreed using “cheap high powered laser pointers that can project a beam up to 20,000 feet would be best.”

That those “balloon popping” lasers of 250 milliwatts or greater could also be used in defensive and offensive operations against the American coalition and NATO Forces.

They discussed “how best to blind a pilot”, as well the fact that a pilot doesn’t necessarily have to look in the direction of a laser to be temporarily blinded from a light beam, and how the laser light scatters or diffracts throughout the cockpit of an aircraft by the window…

The main object is “temporary blindness”, a condition which could last anywhere from a second or two to a minute. “The critical time to strike is just before pilots land the aircraft – it is when enemy pilots are most vulnerable,” said one military adviser who wished not to be named in this report.

It seems the unfriendly sky of Afghanistan may get a whole lot more dangerous for combat and civilian pilots! The reason the Taliban commanders held the meeting was to find ways to counter attack coalition aircraft, which the Taliban is reporting are “bombing the hell out of us” – inside Pakistan.

Also discussed in some detail was “using lasers against NATO troops using day sights and electro-optics and sighting systems for weapons used against the American forces. Against vehicles and soldiers wearing night vision goggles, or looking through binoculars. The Taliban commanders ordered the creation of a “working group” to study methods on how to use lasers in combat, or against commercial and military aircraft.

Lastly they discussed the fact that “green lasers are more powerful than red one”, and are therefore more preferred for use on the battlefield and in combat situations.

They agreed to also field test different lasers and try to enhance commercially available ones for maximum performance.

My source suggests that several hundred lasers have been order over the internet already by the Taliban’s logistics and supply unit, and should arrive at various “front companies” inside Pakistan within a week or two.

I of course have no way to confirm or deny this information.

I discussed this matter with some commercial pilots , who said that lasers are indeed a very serious threat. I also talked with doctors who said that lasers and laser pointers could cause permanent damage to the human retina. But we found no case where a plane was brought down or crashed from someone using a laser pointer for example, although pilots say it could happen if they are blinded while trying to land the plane.