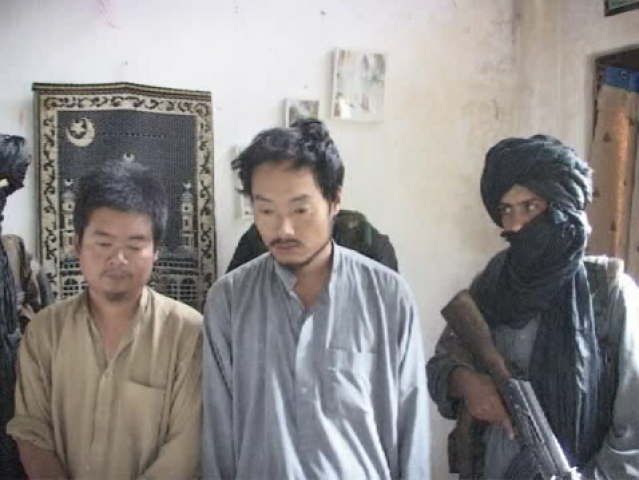 PAKISTANI Taliban militants released a graphic video showing the beheading of a Polish engineer whom they said was killed because Islamabad refused to free detained insurgents.

The tape, seen by an AFP correspondent, was released one day after a spokesman for Pakistan’s umbrella Taliban group said its men had decapitated Piotr Stanczak, who was seized in the volatile northwest on September 28.

Pakistan has seen a number of kidnappings of foreign nationals in recent months, many of them in the northwest, where Taliban and al-Qa’ida militants have been holed up since the US-led invasion of Afghanistan in late 2001.

Authorities in Islamabad are also hunting for an American UN worker abducted a week ago in the southwestern city of Quetta. A shadowy ethnic Baluch rebel group has claimed responsibility for that kidnapping.

Stanczak, who was working in Pakistan for a Polish energy company, was seized by armed men in the town of Attock, about 70 km northwest of the capital Islamabad. His two drivers and bodyguard were killed.

The Polish man made a brief statement in English in response to questions posed by his captors, urging his government to withdraw its contingent of about 1,100 troops from Afghanistan, where they are helping fight Taliban insurgents.

In the next scene, Stanczak is sitting in the same position, but blindfolded. A masked man is shown beheading him with a knife, while two men stand guard behind him, holding AK-47s at the hostage’s head.

A masked militant is then shown saying Stanczak was killed because Taliban prisoners were not released and warning that other foreign hostages could meet the same fate, without claiming to have specific hostages in captivity.

A black banner seen in the beheading video reads: "Tehreek-e-Taliban Pakistan, Darra Adam Khel.” Darra Adam Khel is a town near Peshawar, which is on the edge of Pakistan’s violence-wracked tribal areas on the Afghan border.

A private Polish television station, tvn24, showed an image from the video but not the whole tape "out of respect for the family of the hostage.”

The Polish government made no statement following the release of the video, but Prime Minister Donald Tusk previously said Poland had received "informal confirmation” of the engineer’s death.
TTP is led by tribal warlord Baitullah Mehsud, who has been accused by US and Pakistani officials of masterminding the assassination of former prime minister Benazir Bhutto in December 2007.

On Saturday, a TTP spokesman told AFP by telephone that Stanczak had been killed because the Pakistani government had failed to meet the group’s demands by a Friday midnight deadline.

"We held a meeting last evening (Friday) to consider it and the majority view… was that there should be no more time given to negotiations,” said TTP official Suhail Ahmed.

A purported Taliban spokesman named Mohammad later told AFP that the beheading was carried out early Saturday in tribal South Waziristan, a notorious hub of al-Qa’ida and Taliban militants on the Afghan border.

"We had given a deadline to the government for Friday midnight which they failed to honour and we beheaded the Polish man,” the spokesman said.

Security officials said the negotiations broke down because the Taliban demanded the release of a Pakistani al-Qa’ida  militant known for his expertise in making explosive-packed "suicide jackets.”

The Taliban originally demanded the release of 30 militants in Pakistani custody and then reduced it to a list of six, a security official involved in the negotiations told AFP.

The Taliban said both Islamabad and Warsaw offered it a large amount of money in return for the Polish man’s release but it refused to accept that without the release of the prisoners.

It had also called for the end of suspected US drone attacks against Taliban and al-Qa’ida targets in the tribal areas.