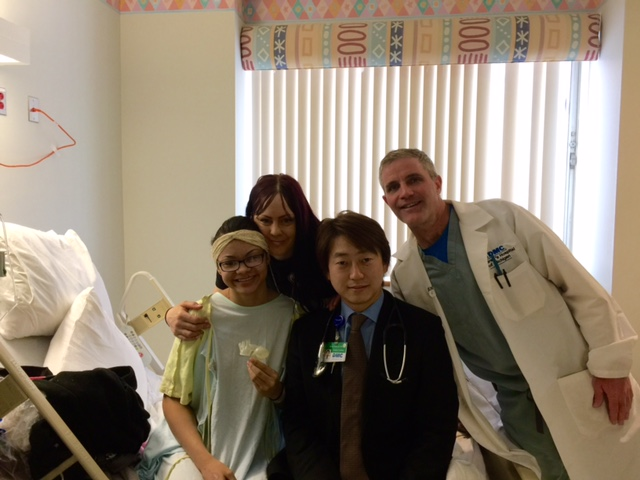 Ariana Smith, a 17-year-old Taylor teen, became the first patient at the Children’s Hospital of Michigan, a part of the Detroit Medical Center (DMC), and the first in Michigan, to benefit from a revolutionary 3D printed heart model to aid heart specialists in treating a very large, complex aortic aneurysm.

In November, 2014, Ariana’s mom Jacqueline Foster decided to have her four children undergo an electrocardiogram (EKG), a test that checks for problems with the electrical activity of the heart, as a precaution since one of her sons had a heart murmur.

When testing revealed Ariana, an active teen who enjoys cheerleading and volleyball, may have potential abnormalities in her aorta, she was referred to the Children’s Hospital of Michigan. She received a cardiac catheterization, a procedure involving a tube that is placed in her blood vessel, so that doctors could diagnose and potentially treat her condition.
What looked to be a relatively routine procedure turned into a major turn of events when it was discovered that Ariana had a huge aortic aneurysm complicated with a tortuous aorta that has a distorted shape or path. This very dangerous condition could take Ariana’s life in the future.

“We were devastated to hear this news. Ariana had no symptoms. I understand an aneurysm is considered a silent killer. We hoped and prayed that everything would turn out ok,” Jacqueline says.

“Ariana’s condition was extensively discussed with our pediatric cardiovascular surgeons and cardiologists in order to provide the best treatment and outcome. Surgical therapy was a high-risk operation for her age and anatomy which could lead to possible complications with her aorta,” says Daisuke Kobayashi, M.D., a cardiologist on staff at the Children’s Hospital of Michigan, who managed her treatment and care.

Dr. Kobayashi explains that heart specialists at the Children’s Hospital of Michigan started exploring the possibility of treating Ariana using covered stents to expand the artery and block the aneurysm to prevent it from rupturing.

Children’s Hospital of Michigan is one of only a few hospitals in the country participating in a research study called the COAST II trial (COarctation of the Aorta Stent Trial). Sponsored by the NuMED company, this U.S. Food and Drug Administration (FDA) approved study uses stents covered with a special lining for the treatment of aortic narrowing and aneurysms. After the stent is placed in the aorta, the lining or covering becomes the blood vessel wall and blocks blood from entering the aneurysm.

The use of covered stents can treat both the obstruction and the aneurysm. However, this very delicate procedure can cause major complications if not performed well.

Due to the complexity of the procedure, a team of cardiologists on staff including Daisuke Kobayashi, M.D., Richard Humes, M.D., Thomas Forbes, M.D. and Daniel Turner, M.D. collaborated on the use of a revolutionary tool using computed tomography (CT) to generate 3D printed models of Ariana’s heart.

The model was developed by Materialise, a leading provider of 3D printing software and services, based locally in Plymouth, Michigan. Through their Mimics Innovation Suite software and HeartPrint services, Materialise was able to transform Ariana’s CT scan into a 3D printed, life-like replica of her aorta enabling the cardiology team to precisely plan treatment and practice the intervention prior to the procedure. This allowed the team of doctors to identify potential issues they might find and precisely pinpoint the placement of the stent without surprises.

“At Materialise, we strive to create a better and healthier world and are proud that our software and services were able to help the great team at the Children’s Hospital of Michigan to make a positive impact on Ariana’s life,” said Todd Pietila, Cardiovascular Business Development Manager at Materialise. “It was a tremendous honor to support this case and we look forward to continued collaborations.”

Dr. Turner says in Ariana’s case, the 3D printed model was important for more than just diagnosing and visualizing the problem.

“Using the 3D printed model of Ariana’s aorta, we performed a ‘practice-run’ or simulation in the cath lab, where we actually placed a stent into the model. This allowed us to precisely plan the procedure and see how the stent responded in her unique and tortuous anatomy. Then, when we performed Ariana’s actual procedure, we had a good idea of how it was going to go,” he says.

Normally, Ariana’s case would require a surgical procedure, with higher associated risk, more discomfort, a longer hospital stay and more time missed from school. With treatment in the catheterization lab, Ariana spent just one night in the hospital and was home the next day.

“We anticipate that Ariana will not require surgery to treat this condition. Dr. Kobayashi will follow her closely in the office. Most importantly, this experience will allow us to treat future patients more safely with the use of 3D printing technology. This is only the beginning,” Dr. Turner says.
As for Ariana, after the procedure she enjoyed pancakes, left the hospital after just one day, went back to school after one week and plans to go shopping for prom.

“We are so thankful to God and all of the nurses and doctors at the Children’s Hospital of Michigan. Ariana is doing great and we would not have had her treatment anywhere else,” Jacqueline says.

For further information on this cardiac breakthrough at the Children’s Hospital of Michigan visit http://www.childrensdmc.org/3DHeart.
###
About the Children’s Hospital of Michigan, www.childrensdmc.org
For more than 125 years, the Children’s Hospital of Michigan is the first hospital in the state dedicated exclusively to the treatment of children. With more than 40 pediatric medical and surgical specialties and services, the hospital is a leader internationally in neurology and neurosurgery, cardiology, oncology, and diagnostic services; it is ranked one of America’s best hospitals for children by US News and World Report and Parent Magazine and is recognized for quality and safety by the Leapfrog Group. The Children’s Hospital of Michigan is one of eight hospitals operated by the Detroit Medical Center (DMC).
About Materialise
With its headquarters in Leuven, Belgium, and branches worldwide, Materialise is a provider of Additive Manufacturing (AM) software solutions and sophisticated 3D printing services in a wide variety of industries, including healthcare, automotive, aerospace, art and design and consumer products. Materialise has been playing an active role in the field of AM since 1990, through its involvement in AM for industrial and medical applications, by providing biomedical and clinical solutions such as medical image processing and surgical simulations and by developing unique solutions for its customers’ prototyping, production, and medical needs. For additional information, please visit: www.materialise.com.