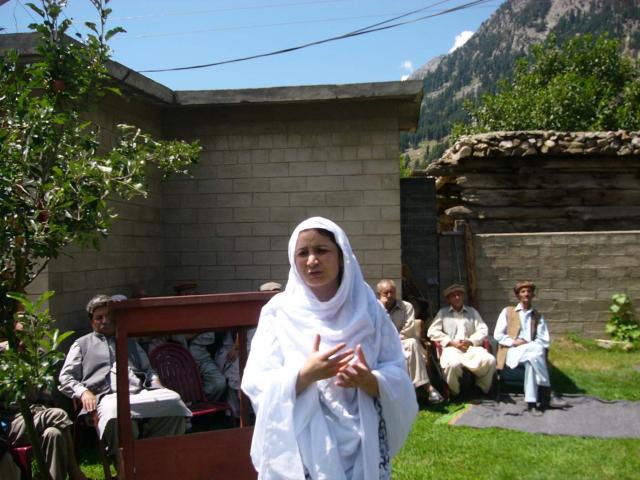 CHITRAL:  A series of Awareness seminars about Tuberculosis (TB) was concluded at Drosh Tehsil  after conducting seminars at Bumborat and Birir of Kalash Valley third seminar at Madaglasht the most remote locality of Chitral while the final seminar on fourth day was held at Drosh some 45 KM from here. District Coordination Officer (DCO) Chitral Mutasim Billah was chief guest on the occasion while the ceremony was presiding over by Sartaj Ahmad Khan Tehsil Nazim Chitral. Advocacy seminar on TB was organized by Provincial TB Control program and district health department while seminar was sponsored by GTZ. Dr. Noorul Islam District TB Control Officer said that TB in the world affects some 2.5 million people while in Pakistan 250000 patients have been detected in Pakistan and 800 patients detecting a year in Chitral. He said TB was declared as Global Emergency by WHO in 1985 while in 2001 it was put on first priority by Govt of Pakistan and 1250 million Budget have been allocated for TB eradicating.

Dr. Nekdad Afridi, Miss Shandana Khisro, Mrs. Azra Ahmad, EDO Health, DCO Chitral, Tehsil Nazim Chitral and Dr. Salahuddin of AKHS spoke on the occasion. The speakers thanked to Sartaj Ahmad Khan for arranging this seminar and Dr. Abdul Ghafoor Provincial TB Control Manager for detailing his team. The speakers stressed upon the general public by taking precautionary measurement to save your youngest from TB. The speakers lamented Peoples Primary Health Care Initiative (PPHI) for no participating in TB Seminars. The speakers urged on government for enhancement in budget for improving Case Detection ratio (CDR). The speakers said that TB is a curable disease and a TB patient can completely healing in 8 months if he continues his treatment, which is free of cost.

DCO Chitral said that we should to be most sincere in our mission and those nations who tackle their professions, as missions never fail. He said that a nation we standing at a very risky verge on one hand we have to die with shaming and great insult way and on the other hand we have to adopt option to live with dignity. He said that if we follow global law we will success in our mission other wise we face failure. Quoting the instance of Japan, which was, hit with nuclear weapon by America but now they declared second economic power in the world because of their sincerity and working as a responsible nation. He said there are so many countries having less natural resources but they are developed countries but we are still under develop despite having rich potential of natural resources. He said that our nation facing and suffering so many problems and diseases as polio, TB, Cancer, Hepatitis and other infectious diseases spreading here because of our careless attitude.  He appeals religious scholars to deliver sermons on major issues in their Friday sermon to aware the nation before indulging these diseases and social evils in our nation. He said mass awareness is must for eradicating any disease from the country. He stressed upon organizers to continue this series and conduct such type of fruitful seminars.

DCO said we should to kick campaign against any social evils. He assured that district administration will fully support you. Earlier that Provincial TB Control Program and district health department had conducted three Advocacy seminars on TB at Bumborat, Birir of Kalash valleys and Madaglasht the most remote locality. A large number of women folk, and people belonging to all walks of life participated the seminar and hailed efforts of Tehsil Nazim Sartaj Ahmad Khan and Dr. Abdul Ghafoor Provincial TB Control Manager for arranging these seminars.