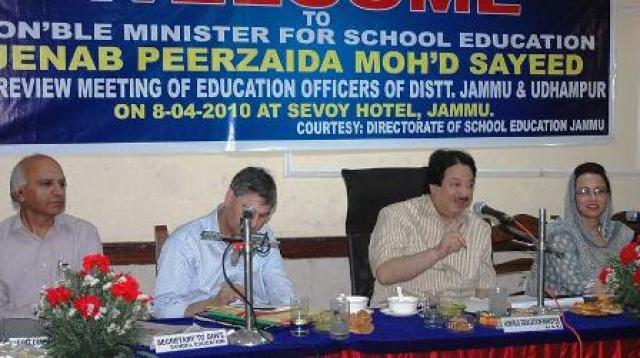 April 08 (Scoop News) -Jammu and Kashmir Minister for Eeducation, Peerzada Mohammad Sayed has said that the Government is committed to provide quality education to enable youngsters to compete at national and international level. He said that comprehensive steps are being taken to evolve congenial educational environment in the educational institutions.

The Conference was also attended by Secretary Education  G. A. Peer, Director Education Jammu, CEOs and ZEOs of both the districts.

The Minister said that after a massive expansion in the education sector, focus is being laid on the consolidation of infrastructure by way of creating and provision for adequate teaching staff. He said that has highest teacher student ratio of one teacher for 18 students against one teacher for 35 students at national level. He said that this target has been achieved by rationalizing the teaching staff and byway of adopting new transfer policy in letter and spirit. He said this would help to enhance the literacy rate to make J&K at par with Kerala. To achieve the desirable target, he directed for strengthening the monitoring system at the lower level and said that Secretary Education would personally monitor it. He warned that stern action would be taken against officers showing any laxity.

Referring to the hidden talent of students, Peerzada stressed for channelizing their talent for better future. “We have made imparting of moral education compulsory in Government and private institutions as the cultural invasion by different media has affected a lot to our society” he added.

For the low attendance and dropout rate in schools, he asked ZEOs to implement Mid- Day Meal programme in every schools, as it helps to ease this phenomenon.

The Minister said that a massive infrastructural developmental programme has already been launched under Sarva Shiksha  Abhiyan  across the State and stressed upon the executing agency to speed up the pace of work for its early completion.