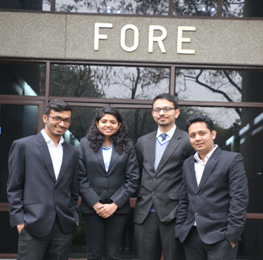 Have you heard of ‘Biodegradable Plastic

Yes….the Business plan on ‘Swachh Plastic’ by Team FORE aim to provide a range of biodegradable plastic products for both industrial & household consumption by manufacturing it indigenously!

The business plan of Swachh Plastic developed by the first year students of FORE School of Management, Delhi – Rahul Gupta, Pranay Thakur, Kunj Gudhka and Pooja Agarwal has been appreciated and rated as one of the best B-Plans by some of the top B-Schools.

In fact the idea at its core is inspired by a willingness to change people’s opinion about plastics, as being only a cause of environment degradation. The team wants to take this revolutionary concept of biodegradable plastic or bio-plastics which can biodegrade easily and thus have minimal environment impact. The growing utilization of plastics in industrial and consumer applications combined with increased consumer awareness has led to an increased demand for bio- plastic products. The biodegradable polymers could be an alternative to the conventional plastic materials. These polymers being biodegradable can be disposed in safe and ecologically sound manner, through disposal processes like composting, soil application and biological waste water treatment.

Now isn’t it in sync with our Prime Minister’s mission of Swachh Bharat Abhiyan  and Make in India campaign! 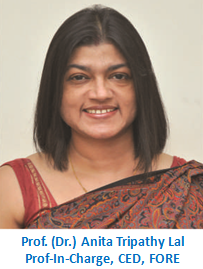 The entrepreneurial mind set of  Team FORE  got activated in the true sense not when the idea came to their minds but when they actually got to put their thoughts into action during the workshop on Business Idea To Business Plan organized by Prof. (Dr.) Anita Tripathy  Lal, Prof-In-Charge, Centre for Entrepreneurship Development (CED) FORE.

The team was later motivated by the Intra College B-Plan competition, “Concoct”, held in the Institute on November, 2015, where theTeam Swachh Plastic came as winners. The B-Plan competition in reality helped the team members to shape their Plan as per the feedback from the judges. The Jury comprised of an Investor, Entrepreneur and a Faculty Member. Based on the suggestionsfrom the experts, the team modified their plan and began participating in Inter College B-Plan Competitions

For Team Swachh Plastic the first Inter College B- Plan competition- Bizooka held at Symbiosis Institute of International Business (SIIB), Punewas in December 2015. Out of the 80 teams only 8 were shortlisted for final on-campus rounds. After a rigorous two days of presentations and answering questions from an expert panel of judges, the Team Swachh Plastic stood second. Incorporating the learnings from their experience at SIIB and refining the plan further they went into the next B-Plan competition “Next Big Venture 2016” at IMT Ghaziabad where Team Swachh Plastic was adjudged at first place amongst the 16 invited teams which included IMI Delhi, IIT Delhi, IMT Ghaziabad and Bits Pilani.

Participation in these various B-Plan competitions has not just been about securing a position. The knowledge and the learnings from these events have been immense. The experience of  developing ‘Ideas into a  Business Plan’ and improving the plan further after every competition and feedback has been worth every bit, as it has been enriching and rewarding for all the team members.

As ‘Foreians’ they are extremely grateful to FORE School of Management and thankful to the team of Centre for Entrepreneurship Development for giving them such opportunity – The idea that once was a seed, has now grown into a beautiful plant. Hopefully someday, it will be an oak, mightier, majestic and standing the test of times.