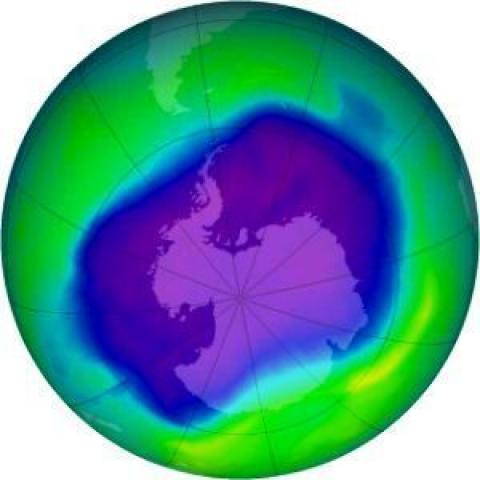 Going to outer space to discharge gas molecules as a cure to ozone layer depletion is one experiment with tens of questions that include possibility and present day importance; the ozone layer hole is considered as a settled issue because of high per centum adherence to the Montreal protocol.

A research work suggests that discharging oxygen gas to depleted parts of the ozone layer will add to the number of molecules available for useful chemical reactions occurring there important for protection against harmful ultraviolet radiation.

An unmanned aerial vehicle or a stratospheric flying airship is capable of carrying a tank of liquid oxygen from the earth surface for this purpose. More volume of oxygen is stored as liquid than as gas submitting the choice of oxygen in liquid state.

Discharging ozone gas directly for this purpose is chemically impossible and unrealistic because of large quantity storage and transportation as gas to that altitude. Ozone, an allotrope of oxygen is usually unstable, reverting to oxygen under atmospheric condition within an hour.

Since oxygen molecules are actively involved in ‘protection’ reactions in the stratosphere and is similarly used in rocket engines stored as liquid & discharged as gas to propel them, it presents a possibility for this objective.

Only depleted parts of the ozone layer shown from models will the gas be dispelled; the flight will hover round the hole to ensure that discharge is even. This research is therefore not for the whole ozone space and will not upset molecular balance up there. It will also provide for more molecules of useful ozone against molecules of ODS in the atmosphere.

There is no urgency with execution of this research but there is a need for rigorous scientific and technical review to trot it further from hypothetical to realistic theory. It will be useful in future for studies relating to geo-engineering, help in relation to Global Warming’s Climate Change and be an emergency option to any dangerous effect from the hole. Interested experts and institutions may join or back up for review.