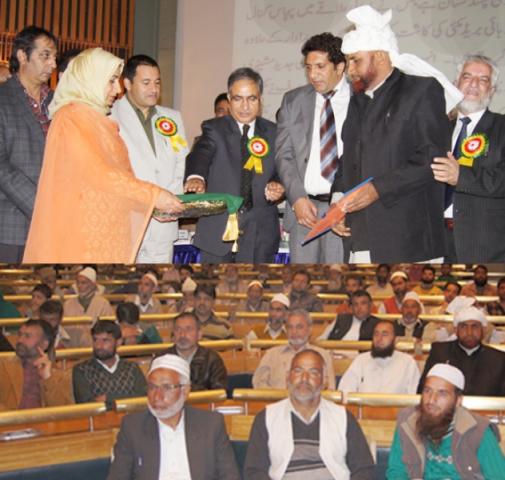 ,April 07 (Scoop News) –    To strengthening the economy of the farmers, Minister for Agriculture,  Ghulam Hassan Mir today said that Government’s thrust is to decrease the cost production in Agriculture and its allied sectors by way of introduction of quality hybrid seeds and technological innovations.

The Minister was addressing the farmers on 2nd Award Ceremony function at SKICC, this afternoon. On the occasion, 10 district level awards and 122 block level awards were distributed among the progressive farmers of the Valley by the Ministers.

The Minister said that “it is a great challenge for the government for decreasing cost production of Agriculture crops for which the Agriculture department and its allied sectors are working round the clock to motivate the farmers for introduction of latest technology in their farm fields for quality production and better yields”. He said in this direction the departments organise the Kissan and machine meals at block level to acquaint them about the objectives viz-i-viz its benefits.

Giving the examples of developed nations of the world,  Mir said that these countries are advance in technology but still the people of these countries, continue agriculture as priority sector. “Instead of this the people of J&K shows least concern towards the agriculture, he added. He said “this trend have forced our  research scientist to  think  for introduction  of latest  technology and  use of quality hybrid seeds for increasing agriculture production besides  to provide better marketing opportunities to the farmers adding that this is the only way to  motivate the youth to opt it as profiting activity”.

Saying that farmers are the basic pillar of our economy, The Minister asked the extension departments of agriculture and university to work with great collaboration with respective departments to bring the research in the field.   He said that our researches should work for marginal farmers as the large chunk of our farmers have small land holdings. He said the present coalition government have given major thrust on Agriculture and its allied sectors for which farmers have been provided tax free fertiliser, pesticides, agriculture implements besides various state and centrally sponsored schemes were launched to benefit them.

Asking the farmers to go for diversification, the Minister said that “if the J&K have to achieve the target of self sufficiency, the diversification is its answer”. He said that farmers have to go for cash cropping in Kashmir valley as it has suitable climatic condition for saffron, vegetable and horticulture production and similarly the farmers of and Ladakh region have to opt the crops of their area.

Mir said that the objective of the holding award ceremony is to acknowledge contribution of progressive farmers in agriculture and its allied sectors. He said that with the efforts of Agriculture Ministry, the common man is sowing interest in agriculture.

The Minister of State for Fisheries & Animal Husbandry,  Aijaz Ahmad Khan today said that the nature has bestowed the State with all climatic conditions in three regions and we are able to cultivate every kind of crop in the State. He said to harness this potential, the farmers community has to opt agriculture on commercial lines to boost the economy of the State. He said besides agriculture the J&K has enormous potential in fish farming, sheep husbandry, poultry and dairy development. He said during last three years the youth of the State have shown encouraging trend towards fish farming on commercial lines. In this sector, Rs. 2 to 3 lakhs could earn the youth per annual on fish farming having one kanal of land available.

Minister of State for Agriculture,  Javid Ahmad Dar said that Government has taken several initiatives for the benefit of farmers. He asked the farmers to come forward and avail these benefits for boosting the agricultural activities in the State.

In his welcome address, the Director Agriculture, , Dr. Farooq A. Lone threw light about the achievements of the Department. He said that the department has taken every step to aware the farmers about latest technology besides facilitating them by way of providing quality seeds and other research knowhow about various crops at their doorsteps. He said the machine melas launched by the department at block level show great response from the farmers’ community across the Valley.