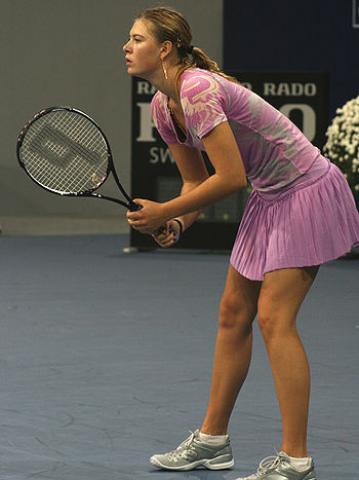 Famous Russian tennis superstar Maria Sharapova is back in circulation after about seven months of absence due to injury.

Sharapova teamed up with fellow Russian Elena Vesnina but lost the game to Ekaterina Makarova and Belarusian Tatiana Poutchek with the score of 6-1 4-6 10-7. The match took place at Indian Wells, California Thursday.

The pretty tennis superstar said she was just glad to be back.

‘I came here and just wanted to test it out. I started training a couple of months ago and I thought I’d test it out in a match situation and play in front of crowd and it was exciting’ she said.

Sharapova was not training part in the singles competition at the Indian Wells and though she said her shoulder felt good she warned it might be some time before she returns full time, abs-cbn news reports.

Sharapova missed last year’s Beijing Olympics and US Open and was unable to defend her Australian Open crown in January because of injury, the report added

Maria Sharapova was born in 1987 to Yuri and Elena, ethnic Russians in the town of Nyagan in Siberia, Russia. She started training at six and attended a tennis clinic in Moscow. The clinic was run by fellow Russian Martina Navratilova who later recommended her to train at the Nick Bollettieri Tennis Academy in Florida.

In 1994, Maria and her father moved to Florida. Her father who later became her coach was forced to work in low paying jobs to fund her tennis studies until she developed rapidly in the academy and began playing in the junior tournaments.

Sharapova was able to develop her playing skills so fast that at age 17, she won Wimbledon, defeating Serena Williams in the finals. She has since won the 2006 US Open and 2008 Australian Open, defeating Ana Ivanovic in the final.