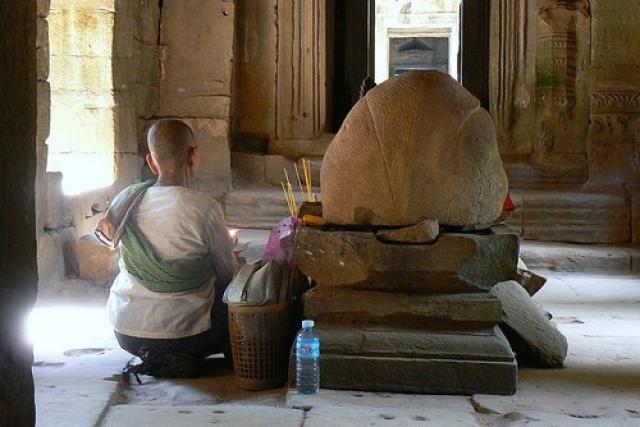 Rising serious tension between Cambodia and Thailand started when UNESCO, on July 7, 2008, declared temple of Preah Vihear as a World Heritage site. The 11th century temple has long been a subject to dispute between the two nations; in 1962, Hague-based International Court of Justice ruled that the ancient Hindu temple belonged to Cambodia, a decision opposed by many Thais.

As the news of the inscription of Cambodia’s 900-year-old Preah Vihear temple announced by the World Heritage Committee early this month in Quebec, Canada, a large number of text messages were sent via cellphone to share the exciting news during the midnight (Phnom Penh time).

People of the two countries witness the power of pride and nationalism, again, particularly at the time that Cambodia heading to national election on July 27 and that Thailand is struggling with her own internal politic.

Not surprisingly, as the world is more connected, at least virtually, Thai and Cambodian citizens begin their discussions on the Internet for the first time. A post of link with title “Preah Vihear belongs to Cambodia,” appeared on Global Voices Online on June 24, attracted 70 comments (at the time of writing this post).

Nationalism versus Rationalism
Somongkol Teng, a former Fulbright scholar, proudly announced the official news of the newly inscribed temple on his blog, which has attracted a number of comments from his readers, including people in neighboring country Thailand.

A comment left by a Thai citizen, who identifies as Tavorn Kamboonreang, on Somongkol’s blog post, has led to a long, heated discussion.

Dear Khamen(Cambodian) Neighbors,
You think you win the Preah Vihear World Heritage now but soon you will see that you lost because UNESCO will send 7 nations including Thailand to “invade” your country. UNESCO ripped our two countries apart by siding with you and your foxy politicians. You know where you belong. Look at Phnom Penh which was built to model after Bangkok by King Narodom who lived and worked in Bangkok under Thai Royal Patronage for years. Rejoice now but be prepared to get back to be under Thailand’s protection again because you need to be where you belong. I am your Thai neighbor and it’s my duty to help you get back to your good sense. Remember who help you when your country was under the Khmer Rouge-Pol Pot and your refugees had nowhere else to run to but Thailand. Please take care and be grateful.

Does an individual opinion reflect the Thai society in general? Thai native Isriya Paireepairit, a technology columnist for a number of Thai newspapers and magazines, wrote a post on the issue in Thai language (he also provides translation here) that:

I quoted the follow up article by Dr. Charnvit Kasetsiri. He stated that Preah Vihear is definitely belonged to Cambodia from both historical-archaeological and legal. The Thai claim (geological) has never been supported by World Court.

Another blog post of his deals with one of his friends, who lives in the United Kingdom. Isriya asked an interesting question in response to a campaign running by his friend who wants to claim back Preah Vihear temple for Thai citizens.

I quoted my conversation with my Thai friend (I’m living in UK at the moment) to demonstrate the general public’s view on this incident. This friend now wants to “bring back Preah Vihear” to Thai people. I question them as ‘is Preah Vihear really belonged to us? (So we can
get it back). I also quote Thongchai Winichakul, a famous Southeast Asian History Professor at the University of Wisconsin-Madison. He wrote an article about nationalist. The title can be translated as “Preah Vihear will be yet another racism timebomb” 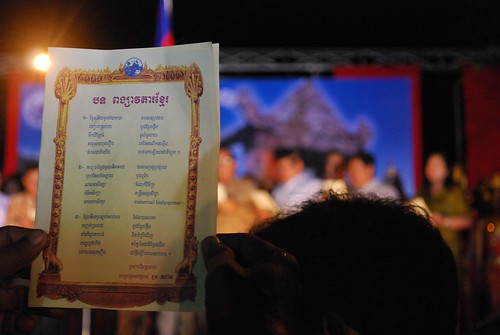 Savada Khmer translated into English
All Khmers, please remember the root and history of our great country
Our boundary was wide and well known
Others always thought highly of our race
And always placed our race as the elders.

We have great heritage and culture
Which has spread far and wide in the Far East.
Religion, arts and education,
Music, philosophy and strategies are all that we have spread.

All Khmers, please remember our roots and history
Which speaks of the grandeur of our great race
Make up your mind and body and try hard to rebuild
In order to lift the value of our nation
To once again rise to the greatness that we once had.

Is the power of nationalism as strong as the power of love? So far, at least two public events organized in the Cambodian capital to celebrate the important event as well as to reclaim the so called ‘unity’ for the country. Donations have been made, largely by Phnom Penh-based business people, to help military at the Cambodian-Thai border. Cambodian journalism lecturer Moeun Chhean Nariddh takes a look at the history of nationalism used in the mainstream media to fight against French colonialism, then the Chinese and Vietnamese dominance. The opinionated media trainer wrote an op-ed to a daily newspaper that:

…Nevertheless, the media’s role in promoting nationalism is not new. The pioneer of Cambodian media started the first Khmer-language newspaper in 1936 with the explicit mission to promote nationalism and engage in Cambodia’s struggle for independence from French colonial rule. A nationalistic Cambodian press appeared first to challenge French rule, then the Chinese and Vietnamese dominance in Cambodia’s economy and politics, and also American “imperialism,” until the Khmer Rouge came to power in 1975.

Richard, an observer and blogger at Connecting the Dots, wrote a blog post that the current Thai government, under-fired for it first supported Cambodian government in getting the temple listed, which it later withdrew due to an injunction issued by Thailand’s Administrative Court to suspend any move endorsing Cambodia’s bid to list the ancient temple as UNESCO’s World Heritage site:

Although the court ruled against Thailand, many Thais never accepted the ruling in their hearts. As a result the signing of the documents between Thailand and Cambodia was all it took to set this off. Thailand’s ruling party the People Power Party (PPP) is under attack for a variety of reasons, this signing became just another avenue of attack. The signing was ruled to be in violation of the Thai constitution in that parliament was excluded. The reputation of the PPP of not caring about laws, rules and the Thai people and now also being seen as very possibly giving up Thai soil to Cambodia has set this nationalism movement in motion. This has lead to escalation of conflict ant the site of the temple with both Thai and Cambodian military on the scene. There is no doubt to outsiders that the temple issue is being used as leverage to force this apparently useless Thai government out.

In an article appeared in Bangkok-based Prachatai, an independent online newspaper, Harrison George discusses the history (including what led to an anti-Thai-riot in 2003) of the two countries, both are members of Association of Southeast Asian Nations.

And now our ignorance of Thailand’s history is threatening relations with Cambodia. We’ve seen this before. In 2003, in the run up to Cambodian elections, actress Suvanant Kongying was falsely reported in the Cambodian press (possibly by a rival company to the Mistine cosmetics she was fronting for) as saying that Angkor Wat should be given back to Thailand. ‘Given back’, because it had been stolen from Thailand by the Cambodians.
The Khmers, whose schoolbooks seem to be as nationalistically one-sided as everyone else’s, got understandably irate about this. But so did the Thais. When the news was breaking I was told by 2 Thais who had the benefit of a university education, that Suvanant’s alleged statement was so obviously untrue it must have been fabricated. I asked what they meant. Cambodia couldn’t have ‘stolen’ Angkor Wat from Thailand, they explained, because Thailand had never occupied it.

Writing from the Thai-Cambodia border where I’m covering the dispute. Needless to say, things out here are incredibly tense. Yesterday we had a major stand-off between Thai and Cambodian soldiers at a pagoda, where they raised their guns at each other and threatened to fire. Today the Thai military has deployed cannons facing our positi