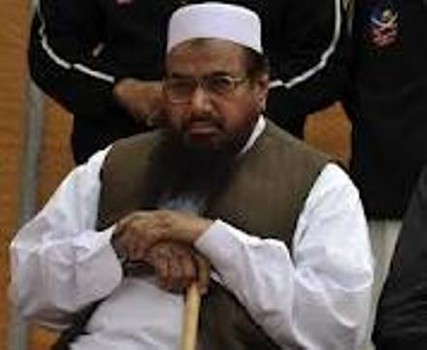 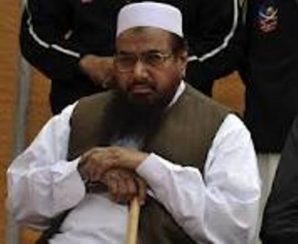 Despite his terrorist acts and affiliation Hafiz Muhammed Saeed operates openly in Pakistan, giving public speeches to thousands of cheering people and regularly appearing on television talk shows from time to time.

Hafiz Muhammed Saeed is the leader of a vicious terrorist network Lashkar-e-Taiba that was accused in orchestrating the death of six American citizens and hundreds of Indian nationals in the infamous 2008 Mumbai terrorist attack.

He also has a $10 million dollar bounty on his head as one of America’s most wanted terrorists.

In fact he is treated like a celebrity of sorts in Pakistan, which refuses to extradite or arrest him, despite numerous requests on the part of the United States.

“I am here, I am visible. America should give that reward money to me,” he told reporters, while smiling, mocking Washington for placing a bounty on a man whose whereabouts are no mystery in early 2012.

“I will be in Lahore tomorrow. America can contact me whenever it wants to”, he said.

According to the Detroit Free Press: “Analysts have said Pakistan is unlikely to arrest Saeed because of his alleged links with the country’s intelligence agency and the political danger of doing Washington’s bidding in a country where anti-American sentiment is rampant.”

At the hotel, located near the Pakistani army’s main base and only a half hour drive from the U.S. Embassy in Islamabad, Saeed was flanked by more than a dozen right-wing politicians and hardline Islamists who make up the leadership of the Difa-e-Pakistan, or Defense of Pakistan, Council. The group has held a series of large demonstrations against the U.S.

He denied involvement in the Mumbia attacks. Saeed founded Lashkar-e-Taiba in the 1980s allegedly with ISI or Pakistani intelligence agency and military support did that.

This at the same time the US was pouring hundreds of millions of dollars in aid to Pakistan to fight terrorism.

“It flies in the face of reason, why we should support Pakistan which is a basket case”, says A. Campos of Charlotte, N.C. “It makes me angry that my tax dollars are wasted on Pakistan when my school district is cutting back and laying people off and Charlotte has roads and bridges that are in need of repair”, he said.

Why doesn’t the US go in and kill this guy, like we did Bin Ladin. The guy is a terrorist and we have his address don’t we. My God he is right down the street from the US embassy for Pete’s sake.

To date  he currently lives in Lahore, Pakistan in a “fortified house, office and mosque” that is guarded by Pakistani police and his supporters? I know this because I still get email alerts on this guy!

All the while the US continues to pour military and financial aid in that country?