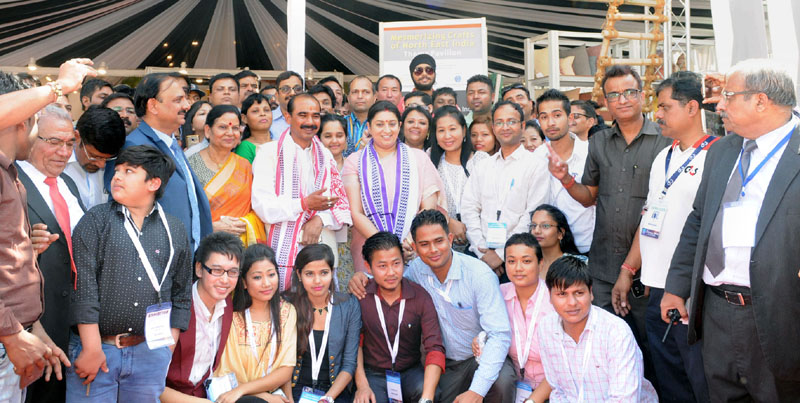 The Union Minister for Textiles, Mrs. Smriti Irani in a group photograph at the inauguration of the IHGF-DELHI FAIR – AUTUMN 2016, at India Expo Centre & Mart, in Greater Noida on October 14, 2016. The Minister of State for Textiles, Mr. Ajay Tamta is also seen.

While visiting the fair, the Textiles Minister expressed her appreciation for the state-of-the art exhibition centre possessing world-class facilities. She commended EPCH efforts for creating an infrastructure that helps not only handicrafts exporters but also provides direct and indirect employment to many people. Mrs. Irani said that artisans and crafts persons are the backbone of handicrafts sector and that they should be provided all required assistance, with regard to design intervention and technology, in order to create marketing platforms for their products.

The Minister appreciated EPCH for bringing products from natural fibers made by artisans and crafts persons of North Eastern, Narsapur and other craft clusters, at the world’s largest handicrafts fair. She also congratulated EPCH in attracting buyers from more than 100 countries, with an increase in number of visiting buyers by around 23 percent, over last year.

To get benefitted from the visit of tourists in the country, Mrs. Irani requested Dr. Mahesh Sharma, Union Minister of State for Tourism and Culture, who was also present at the inaugural ceremony, to establish souvenir shops in famous ASI monuments in which products made by artisans and crafts persons can be sold, thereby providing them additional marketing opportunities.

In his address, Dr. Mahesh Sharma said that India Expo Centre & Mart has brought laurels to the town of Greater Noida, which is popularly known for various National and International events.

Addressing the gathering, Minister of State for Textiles, Mr. Ajay Tamta said that handicrafts sector has achieved greater heights since independence and that IHGF-Delhi Fair is one of the reasons for this progression.

Member of Legislative Assembly, Uttar Pradesh, Mrs. Vimla Batham; Chairman, EPCH, Mr. Dinesh Kumar, President of the Fair, Mr. Naved Ur Rehman, other dignitaries, and press and media from India and abroad were present at the inaugural ceremony.

The fair is being organised by Export Promotion Council for Handicrafts [EPCH] from 14 – 18 October, 2016 at India Expo Centre & Mart, Greater Noida. EPCH, which is a nodal agency for promotion and development of handicrafts has been organizing the Indian Handicrafts & Gifts Fair for the last 22 years. IHGF-Delhi Fair Autumn 2016 is expected to generate huge amount of enquiries and orders.