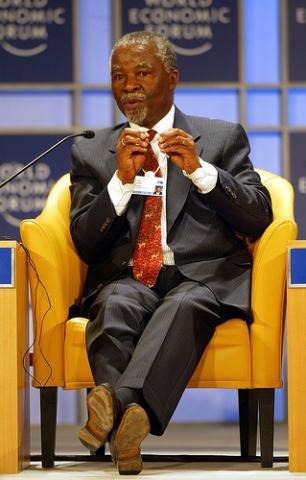 In the history of mankind, there remains one man recorded to have taken unbearable amounts of abuse from the people he lived to save, which earned him reference as the Son of God.

Little did we know that in our time, another man will rise, and keep marching on in the mission to save Zimbabwe, amidst all insults and ungracious statements being thrown at his person from all four corners of the world.

Just like Jesus Christ, the Son of Mbeki continues to pursue his Zimbabwe mission, despite all sorts of stones being pelted upon his torso, saliva being spit on his face, and a sharp prickly barbwire rigged around his head.

Many of us are beginning to wonder why Thabo Mbeki is subjecting his physical and emotional well being to all this torture by still continuing to accept the humongous task of brokering peace and stability in Zimbabwe.

There’s a popular saying, “Don’t fight, go the direction you are being pushed.”

The Son of Mbeki should just call Morgan Tsvangirai’s bluff and recuse himself from all Zim mediations, as per the MDC leader’s latest outburst.

It has been suggested in many forums that there could be no other way of addressing the Zimbabwean problems, except by shouting at Robert Mugabe from rooftops.

Let us then see how much stability these prima donnas would be able to broker.

As for the Son of Mbeki, history will nevr forget him.