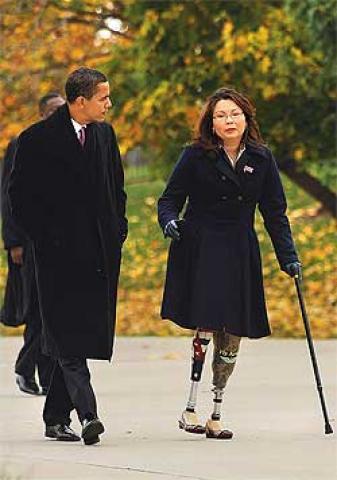 President Barack Obama intends to nominate a Thai-born US Army helicopter pilot who lost both her legs in a grenade attack in Iraq as an assistant secretary at the Department of Veterans Affairs, the White House says.Tammy Duckworth ran for an Illinois seat in the US House of Representatives as an anti-war candidate in the 2006 election, but she failed to win despite a national wave of discontent with the war.She currently heads the state of Illinois Department of Veterans Affairs.lw-2If accepted in her new job, Ms Duckworth will direct the Veteran Affairs’ public affairs office as well as oversee programmes for homeless veterans, consumer affairs and special rehabilitative events.Born in Bangkok, the 41-year-old war veteran is the daughter of Frank Duckworth, a former marine turned diplomat, and Lamai Sompornpairin.Her Thai name is Ladda. She can speak fluent Thai and Indonesian, and still has a trace of an accent from spending much of her youth in Southeast Asia.Her last visit to Thailand was in 2007. She joined the US military while in graduate school and signed up to be a helicopter pilot because it is one of the few positions where women are able to serve in combat.She was co-piloting a Black Hawk helicopter north of Baghdad on Nov 12, 2004, when the cockpit was struck by a rocket-propelled grenade.