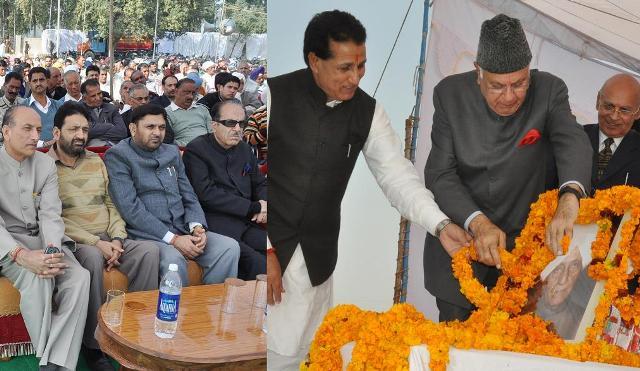 Dr. Abdullah was addressing 4th death anniversary function of Thakur Baldev Singh Chib at Satriyan R.S. Pura today. He said that the State will always remember his contribution in respect of extending whole hearted support to poor and down trodden communities. He said such personalities can never be forgotten and he has proved to be a torch bearer for all the people of present times.

Referring to the steps being taken by central and State Government in ameliorating the lot of deserving persons, Dr. Abdullah said that several schemes of welfare are under execution to provide succor to socially deprived and poverty hit families. He said that widows, orphans, handicapped and above all poor students are being provided financial assistance and scholarship to make them live an honourable and dignified life.

Dr. Abdullah  on this occasion announced that the road from R.S. Pura to Satowali will be renamed on the name of Thakur Baldev Singh.

Minister for Medical Education and younger brother of Late Thakur Baldev Singh,  R. S. Chib, while paying rich tributes to the late leader said that Th. Baldev Singh left no stone unturned in creating a cordial atmosphere for a common man to live a peaceful and dignified life. He said that late leader had a vision to make R.S Pura a prosperous and progressive tehsil and helped people in facing the challenges of poverty and helplessness. He said that every year when late leader is remembered, people speak of his superb personality and high stature.

Chib appealed people to adhere to the principles of Thakur Baldev Singh who cherished for strengthening secular fabric and bonds of brother hood in the State.

Filed under: Media & Tech, World
Share Tweet Pin G Plus Email
previous article: 1947 partition could not divide hearts & emotions of the people living in two sides of LOC: Rather
next article: J&K Government aims at educating every child in state:Peerzada