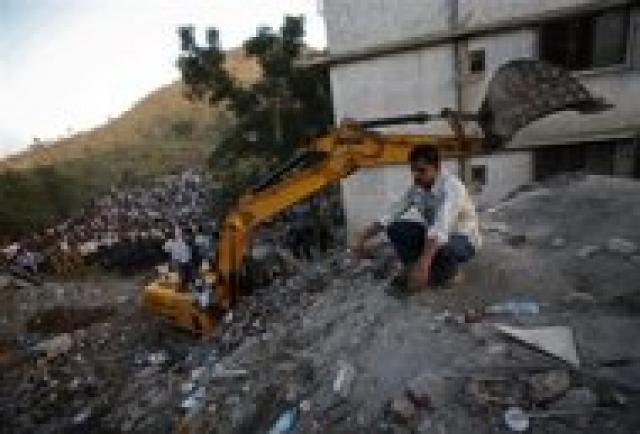 The seven-storeyed and half-constructed building in a forested area in Thane collapsed on Thursday. About 72 people were reported to be killed and 36 injured as on today. Reportedly, there may still be more bodies inside.

The rescue is still going on. The rescue workers pulled an injured lady from the rubble after she stayed alive for 36 hours there. The workers heard her voice and used camera tool to pinpoint her location under the rubble. Even, a 10-month old baby was taken out from the debris on Friday.

The rise in illegal construction by developers who use substandard materials and cheap methods is attributed to the shortages of cheap homes in the country .These homes are offered at very low rents to low-paid job holders.

According to the Thane Municipal Corporation the building has been constructed using poor materials and without proper approvals or sanctions under rules.

On Saturday, about 100 workers from the national disaster relief agency are working non-stop with jackhammers and other equipment to cut through the mound of metal and concrete.

He said 72 people had been killed and 36 injured had been admitted into local hospitals. “As the sun rose on Saturday, around 100 workers from the national disaster relief agency continued to use jackhammers and other equipment to cut through the pile of metal and concrete.

The woman dragged from the building on Saturday was found after workers heard her voice and used camera equipment to pinpoint her location under the rubble. The Deputy Municipal Commissioner of the area has been suspended following the collapse, which the state chief minister said was due to the building being built illegally, local media reported.

Police is searching for the builders to arrest him with culpable homicide in connection with the disaster of collapse taking so many lives and injuring others.