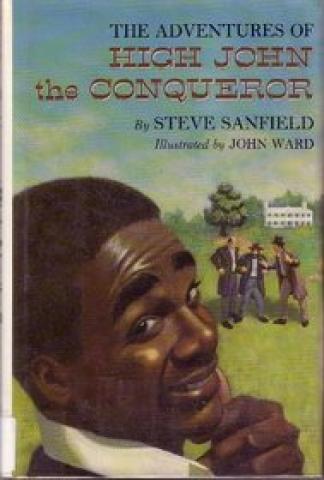 I found this book for free at the thrift shop in Phoenicia, New York (the hamlet where I live); it’s for children, but every American should read it. I’d heard of High John the Conqueror in the Muddy Waters song, "Mannish Boy":

I think I’ll go down,

— but I never knew who he was. In fact, he’s a folk hero, like Paul Bunyan, a proto-superhero. But High John is also a slave, in the American South. He tricks his Master (referred to as "Old Master" — he has no other name) over and over. It’s a highly satisfying plotline, reminiscent of the Roadrunner and Wile E. Coyote. Here’s an excerpt from the very first story, "Master’s Walking Stick":

"Why thank you, John. I was beginning to wonder if you were going to take any notice of it."

"Oh Massa, I noticed it right off. I mean it’s the only walking stick I’ve ever seen with three ends."

"Three ends?" asked Master. "What are you talking about, John?"

"Well, I ain’t talking about anything but the three ends to that stick," John answered.

"John, are you drunk or have you gone crazy?"

"I’m not drunk and I’m not crazy, Massa, but I can see as clear as the nose on my face that your stick’s got three ends."

"John, no stick’s got three ends."

This being the Deep South, where everyone has lots of time, the conversation goes on and on, until:

John raised the stick over his head and threw it directly into the center of the pond, where it sank without a trace.

"And that’s the third end of that stick, right?" said John with a twinkle in his eye.

One of the fascinating elements of the book is the delight the Master takes in High John. He owns this person, who is smarter than himself. It reminds me a bit of Pharoah’s relationship to Joseph, in Genesis.

Steve Sanfield is an "award-winning poet and professional storyteller," who sought out the tales. He wandered around the South, begging aged African-Americans to tell him about High John, but most would not. This book is a secret store of knowledge about outwitting the oppressor. Most of this wisdom involves language. When you’re a slave, it turns out, the quickest route to freedom is through puns. Steve, as you see, avoids writing in dialect, except for the word "Massa." It’s hard not to identify with High John The Conqueror (one of the great names in world literature).