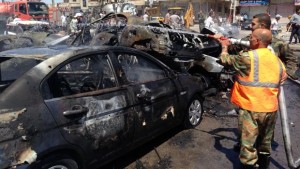 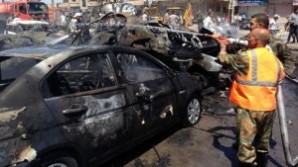 A picture taken with a smartphone on May 25, 2014, shows carnage  of one of the two car bomb attack in a Syrian government -held area in Syria’s central city of Homs.

The Al-Nusra Front, the main Al Qaeda affiliate in Syria, has claimed responsibility for at lease two latest devastating car bombings in a pro-Syrian government neighborhood of the central city of Homs that killed at least 10 innocent civilian – non combatants.

The Al-Nusra Front made the claim in a statement posted Monday on its Twitter feed.

“Allah has given a gift to his warrior servants of the Al-Nusra Front in Homs,” said the statement. “The two (cars) were detonated at the same time to kill the greatest number of thugs,” it added, referring to pro-government gunmen.

Since then it has been described as “the most aggressive and successful” (Source: Al-Qaeda affiliate playing larger role in Syria rebellion http://www.washingtonpost.com/blogs/post-partisan/post/al-qaeda-affiliate-playing-larger-role-in-syria-rebellion/2012/11/30/203d06f4-3b2e-11e2-9258-ac7c78d5c680_blog.html).

The group has also been described as “one of the most effective rebel forces” in Syria (Source: Jihadis may want to kill Assad. But is he lucky to have them? http://www.csmonitor.com/World/Security-Watch/2013/1010/Jihadis-may-want-to-kill-Assad.-But-is-he-lucky-to-have-them).

The bombings occurred over the weekend, weeks after rebels and pro-Syrian government forces agreed to a truce that allowed for the evacuation of rebel fighters from besieged parts of the city. There is some concern that the attacks could undermine a similar agreement that is being negotiated in the nearby rebel -held area of al-Waar.

The rebel groups fighting the Syrian government are largely supported by the United States and Saudi Arabia.

“Rebels and their Saudi backers hope the Obama administration will be persuaded to ease its long-standing resistance to supplying advanced weaponry that could tip the balance in the grinding civil war—especially shoulder-fired missiles capable of bringing down planes” (source: “Advanced U.S. Weapons Flow to Syrian Rebels” http://online.wsj.com/news/articles/SB10001424052702304626304579509401865454762).

The rebel groups, including those closely affiliated with al-Qaeda, like the Al-Nursa Front hope to establish a pro Sunni Islamic Republic in Syria which can impose their radicalized version of Islam on the repressed people of Syria in their bid to terrorize and wage war against the minority Shia population.

This is part of a wider global war in Islam, being led by Saudi Arabia (the chief sponsor to radical Islamic terrorism in the world today) that seeks to determine the future direction and course of Islam in the world and tip the balance of power in favor of its version of Islam, based on Wahhabism.

Wahhabism (Arabic: وهابية‎, Wahhābiyyah) is a religious movement or sect or branch of Islam, based in Saudi Arabia variously described as “orthodox”, “ultraconservative”, “austere”, “fundamentalist”, “puritanical” (or “puritan”), an Islamic “reform movement” to restore “pure monotheistic worship”, or an “extremist pseudo-Sunni movement.” It was the religion ascribed to Osama Bin Laden.