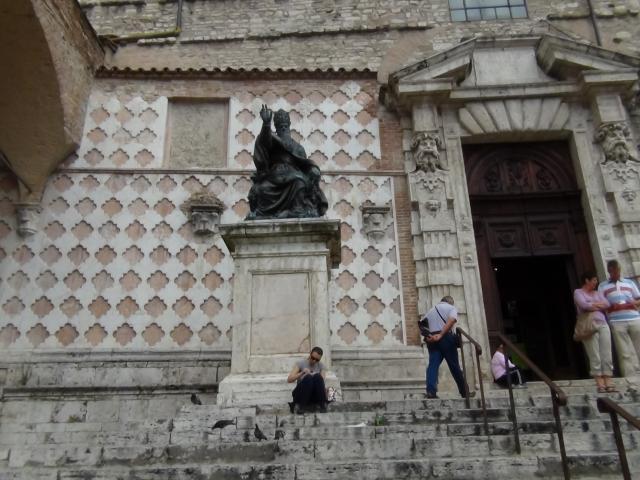 British exchange student Meredith Kercher was murdered on November 1, 2007 in Perugia, Italy, the victim of a knife attack and a sexual assault. The case received widespread media coverage in both Europe and the United States largely because both the victim and one of the accused, Amanda Knox, were attractive young women.   Sexually motivate homicides of young women in their prime are in all but the rarest of circumstances committed by troubled males acting alone and this crime was no exception.

In those few sexually motivated killings that include female participation, invariably you find a psychopathic, manipulative male teaming with a wife or girlfriend he has been with for an extended period of time. No crime in history compares to the sex game gone wrong scenario put forth by the prosecution. This is but one of the many reasons that Amanda Knox and Raffaele Sollecito are obviously innocent.

Examination of crime statistics or comparison to specific past crimes cannot prove someone guilty or innocent but it is an important part of the picture.  Always investigators should go where the evidence takes them.  In the trial of Amanda Knox and Raffaele Sollecito they did not follow the evidence and they became obsessed with a theory of the crime that made no sense.

Comparison to Other Crimes

According to FBI statistics for 2009, about 10.0% of the 13636 murders in the US were committed by women.  When women do kill they are often striking back at male abuse; there may be a gang association or institutional killings; terrorism or profit can come into play.  In other cases there may be questions of sanity.  Killings of women by women with a sexual motive are among the rarest of all serious crimes.

In a 2005 article in the Journal of Forensic Science, Wade C. Meyers M.D. and others wrote, “There are arguably only two cases worldwide identified in the last century of women who independently committed serial sexual murder: Marti Enriqueta and Aileen Wuornos.”  They go on to say, “America has only experienced a single female serial sexual killer in its history—Aileen Wuornos.”  To be clear this article is talking about serial killers (those who kill more than once) and they specifically exclude women who kill as part of a team, but the point is clear:  Sexually motivated killings by women are exceedingly rare.

Curiously, there are a handful of cases where married couples or those in long term dysfunctional relationships commit sexually motivated serial killings.  Karla Homolka, Judith Neelley, Rosemary West, and Myra Hindley along with their male partners are examples. The important point is that when women are involved in sexually motivated killings, they are teamed with a sinister male who is calling the shots.  In the murder of Meredith Kercher it is alleged that people who barely knew each other, if at all, got together and committed a forcible rape at knife point that resulted in death.  And it was supposedly all the work of a female ringleader.  There is no precedent in history for a crime of this nature.  It has never happened before.

Three people have been convicted of the murder of Meredith Kercher.  One of them, Rudy Guede, did it alone.  The other two had no involvement. Unlike the others, he is tied to the crime by vast physical evidence.  By his own admission he was present when the murder occurred and he fled the scene of the crime.  All close observers of the case believe he was there and none believe his story.

According to Rudy Guede, he had met Meredith Kercher at a disco on Halloween, the night before the murder, and they had agreed to get together the next night at her house.  He claims there was consensual sexual contact and that somebody else came in and killed Meredith while he sat on the toilet.  The defensive wounds to his hands are from his struggle with the real attacker.  He says he tried to comfort Meredith but that in the end he reasoned that he would be blamed because he was black.  Later that night he is seen dancing at a discotheque.  The next day he flees to Germany.

Meredith Kercher had recently begun an intimate relationship with an Italian young man, Giacomo Silenzi.  Friends of Meredith Kercher who were with her during the time that Guede claims the date was made are clear that they did not see the two together that evening.  There was no cell phone or Internet contact ever between Guede and the others, even though all used the technology regularly.  Amanda Knox because she worked in a bar and he was a bar crawler had seen him around – nothing more.  Rudy Guede was not friends or acquaintances in any sense of the word  with Amanda Knox, Meredith Kercher, or Raffaele Sollecito.  They did not get together with him for a sex orgy.

During lengthy police monitored phone calls while on the run, Guede first says he wasn’t there when the murder took place  then admits that he was.   He describes the first version of his ever changing story but never says anything about Amanda Knox being there.  Is this theory of the crime believable? No.

The Prosecution’s Theory of the Crime

As Perugia’s controversial Public Minister, Giuliano Mignini, would have it, the crime was masterminded by Meredith’s American flatmate Amanda Knox.  She had, they say, manipulated her new boyfriend of a few days, Raffaele Sollecito, and a local drifter named Rudy Guede into sexually assaulting and killing Meredith.   It was a sex-game gone wrong.   Rudy Guede’s DNA was inside the victim’s vagina because Amanda Knox told him to put it there.  No DNA of Amanda Knox could be found in the murder room because she had cleaned it all up with bleach.  Amanda Knox was the ringleader and the other two, her boy toys.  Rudy Guede and Raffaele Sollecito (two men who both deny knowing each other) were just doing what she told them to do.

Later Mignini would argue that it might have been a fight over money and that Amanda could have directed the whole thing from outside the room, which would explain why none of her DNA could be found in the murder room.  Initially, of course, Mignini had thought that satanic rituals had come into play but other prosecutors on the case convinced him early on to abandon that ridiculous claim.  In the words of Pulitzer Prize winning New York Times columnist, Timothy Egan, the motives ascribed to Amanda were, “preposterous [and] made-up.” Is this theory of the crime believable? No.   I hereby challenge anyone here to name a single crime in history similar to what is alleged of Amanda Knox.

The Defense’s Theory of the Crime

To the defense and virtually all outside experts this was a tragic but very simple crime.  Rudy Guede murdered Meredith Kercher alone.  In the months preceding the murder he had been involved in a series of break-ins including one incident in which he threatened a person with a knife inside his own home.  Always he acted without accomplices.   In so many ways his modus operandi in these prior incidents closely matched what was found at the crime scene.

Rudy Guede’s DNA, and only Rudy Guede’s DNA,  was all over the crime scene.  His palm and foot  prints were there in the victim’s blood.  His DNA indicated sexual penetration. He had defensive wounds,  he flees,  he admits being there, and he had motives of both sexual desire and theft.  He very much fits the profile of someone who would commit this crime.

No DNA of Amanda Knox was found in the room where the murder took place – none.

Even though Rudy Guede was not a student he was a fixture on the student bar scene where by all accounts he had little luck with the young women from the local universities.  In the months leading up to the crime he was unemployed and increasingly involved in theft.  He also had a well documented history of lying.

Is this theory of the Crime believable?  Yes.

In just a few days an Italian appeals court will decide whether to affirm or overturn the December 2009 conviction of Amanda Knox and Raffaele Sollecito for the murder of Meredith Kercher. Most observers think the case against the two has collapsed, although many believe that issues surrounding a man named Patrick Lumumba may be conveniently used to help Italian judicial officials save face – very important in Italy.

The case against Amanda Knox and Raffaele Sollecito has never been about reasonable doubt. Theirs is an affirmative defense.  They didn’t commit the crime because there is a mountain of evidence that Rudy Guede did it and there is no viable scenario that has them joining him in the crime.  Part of that logic is the extreme unlikelihood of female participation in a crime of this nature.

If the two judges and six lay people who form the jury of eight in the appellate trial base their decision on the evidence before the court and on common sense, then there decision can only be that the two are innocent.