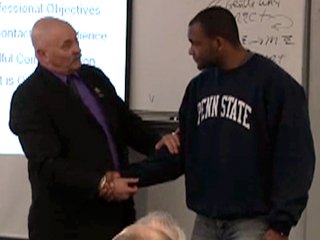 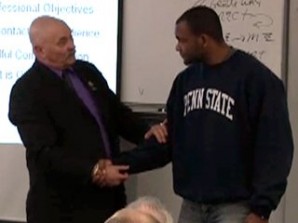 I first heard about verbal judo when I attended the Security Officer training course at the Criminal Justice Institute in Ybor City, Florida in 2011.

There I saw a 4 minute clip of a DVD video presentation by a Mr. George “Doc” Thompson, founder and president of the Verbal Judo Institute.

Needless to say I was very impressed with the presentation.

The instructor of the course Joe Parson’s said it was a “way to communicate effectively with difficult people under stressful situations.”

It was designed  specifically for police officers as a way to deal with people during a traffic stop and developed from there.

It has since evolved into a “tactical communication course”, designed to achieve the goal of voluntary compliance with officer commands. It is also a  way to keep Police officers from “snapping on the street”.

He explained it as the ability to present an “option” to people which works on the selfish principle of convincing someone to do something that is in their best interests really.

Verbal judo is for dealing with three basic types of people:

3) People who are difficult but who sound nice

Doc Thompson presents it in such a way as an officer who uses his techniques is “always in control during a conversation”, before it gets a chance to “de-escalate” into a fist fight or physical confrontation.

He correctly identifies that “ego” is the greatest problem in policing. And lets face it he is absolutely correct on that.

I know in my case I have met some arrogant police officers in my time, many of whom would get angry in certain situations and then begin to bully and brow beat a subject.

Ask almost anybody and they will tell you of a time when a police officer acted badly in certain situations. Everyone seems to remember those guys. Usually that was because that person was having a bad day and “projected” that on someone they had to deal with in the course of their jobs.

You might also want to watch a video called: “Verbal Judo: Diffusing Conflict Through Conversation” http://www.youtube.com/watch?v=btBw70HAys4&feature=related

I also ran across an blog by a guy called jack Justice called “Verbal Judo -7 Things Never to Say to Anyone, and Why”, which is an excellent resource for security guards in particular. His website address http://churchsecuritymember.com/7-things-never-to-say-to-anyone-and-why-part-2-verbal-judo-church-security-safety/