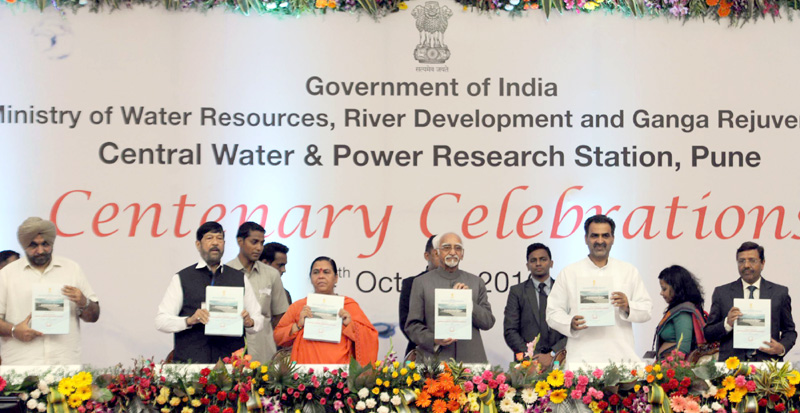 Pune (PIB-GR-TYP-BIN): The Vice President of India, Mr. M. Hamid Ansari has said that the biggest concern for our water-based resources in the future is the sustainability of the current and even future water resource allocation as water becomes more scarce. He was addressing the Centenary Celebrations of Central Water and Power Research Station (CWPRS) in Pune, on Oct 4.

The Vice President said that India’s proverbial poverty amongst plenty is related to results from the hydro-meteorological conditions, inequitable spatial distribution, non-utilization and ill-planned utilization of water resources. He also said that in view of the vital importance of water for human and animal life, for maintaining ecological balance and for economic and developmental activities of all kinds, and considering its increasing scarcity, the planning and management of water resource and its optimal, economical and equitable use has become a matter of the utmost urgency.

The Vice President said that our country is facing an acute water crisis due to: India’s large population that led to a stress on available water resources, poor water quality resulting from insufficient and delayed investment in urban water-treatment facilities and dwindling groundwater supplies due to over-extraction.

The Vice President said that the twelfth five-year plan (2012–17) document had detailed attention on several of these issues. He further said that it had put great emphasis on aquifer mapping, watershed development, involvement of civil society and NGOs, and efficiency in developing irrigation capacity. Because water is a state subject under our constitution, state governments are expected to play a large role in these efforts, he added.

The Vice President said that for 100 years the CWPRS has been providing the nation with valuable insights in the management of our water resources and has become the principal agency to cater to the Research and Development needs of projects in the fields of water and energy resources development and water-borne transport.

He also said that he is sure that with the support of the Government of India, CWPRS will continue making waves at the cutting edge of hydraulic research by continuously improving its facilities and expertise. In the coming years, the impact of climate change on hydrological cycle and the water availability in our country is likely to become a central question before national planning agencies, he added.