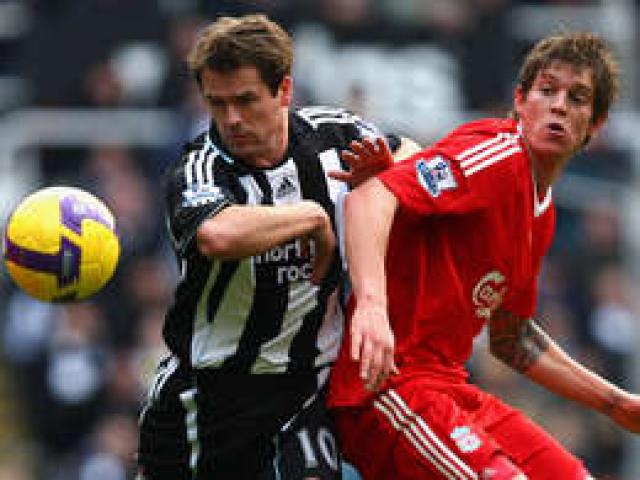 Liverpool surged three points clear of Chelsea with an impressive 5-1 win at Newcastle while the Blues drew at Craven Cottage.


A Frank Lampard double looked like it was enough to give Chelsea all three points at Fulham – until Clint Dempsey scored a dramatic late equaliser.

Fulham took a shock 10th-minute lead at Craven Cottage – the visitors’ defence was at sixes and sevens when Simon Davies delivered a free-kick into the box – and Dempsey was on hand to poke the ball home.

Chelsea boss Luiz Felipe Scolari was forced into some early changes because of injuries to Alex and Florent Malouda – bringing on Nicolas Anelka and Ricardo Carvalho, for his first start since October 29 following a knee injury.

The second half was dominated by Chelsea. Lampard’s first came in the 51st minute, when he tapped in from eight yards out.

The England midfielder’s second – a free-kick from outside the area – had more to do with a gap in the Fulham wall and a goalkeeping blunder from Mark Schwarzer.

But in the final minute of the match Dempsey headed home the equaliser and was promptly booked for his goal celebration, although Schwarzer redeemed himself in injury-time by denying Lampard his hat-trick.

The point means Chelsea slip three points behind Liverpool, who will go into 2009 as leaders of the Barclays Premier League after embarrassing Newcastle 5-1 at St James’ Park.

The result in the lunchtime kick-off capped a miserable end to the year for the Magpies, whose fans have seen their hero Kevin Keegan leave after a second stint as manager – followed by an announcement that the club was being put up for sale by owner Mike Ashley.

Just hours before today’s game, Ashley announced the club was no longer for sale.

Two goals from captain Steven Gerrard – and one each from Sami Hyypia, Ryan Babel and substitute Xabi Alonso (penalty) – secured a comfortable win for the Reds, with David Edgar scoring the consolation.

Stoke’s game at West Ham was overshadowed by the second half sending off of Ricardo Fuller for unsporting behaviour – against his own team-mate.

Television replays show Fuller taking a swing at Andy Griffin – then getting a straight red card from referee Michael Jones.

Down to 10 men, Stoke were unable to hang on to their early lead given them by Abdoulaye Faye’s header at the back post from a corner after four minutes.

A 52nd-minute strike from Carlton Cole levelled the contest, and Diego Tristan claimed the second when Cole’s goalbound shot hit the substitute before finding the net.

He doubled the scoreline 25 minutes later, but not in as spectacular fashion. This time his free-kick from a similar distance rebounded off the wall and back to the Spaniard, and his volley at goal rebounded off Daryl Murphy and past the wrong-footed Marton Fulop.

Substitute Dan Gosling put the game beyond Sunderland in the 84th minute, giving the hosts only their second home success of the season and making it a miserable first game in charge for Ricky Sbragia.

William Gallas’ header in the 82nd minute from Denilson’s free-kick was enough to beat Portsmouth at the Emirates Stadium.

Both sides had good chances. Portsmouth’s Peter Crouch came close to opening the scoring, but his header in the 24th minute hit the post.

Mikael Silvestre also nearly broke the deadlock with a second half header which beat David James, but it was cleared off the line by Sylvain Distin.

Tottenham lost 2-0 at West Brom and had Benoit Assou-Ekotto sent off for a dreadful tackle on Gianni Zuiverloon in the 34th minute.

The hosts proved too strong in the later stages and goals from Roman Bednar (83) and Craig Beattie (90) won it for them.

An injury to Emile Heskey looked like a blow to Wigan’s chances at Bolton. The striker was forced off just after the half-hour.

But Steve Bruce’s men were given a boost just before half-time when Heskey’s replacement Henri Camara was fouled by Andy O’Brien in the area and Amr Zaki converted the spot-kick for the game’s only goal – which lifts the Latics up to seventh.

In the late kick-off, Manchester City needed a last-minute equaliser by Robinho to draw 2-2 at Blackburn. Dean Sturridge was the super-sub for City – coming on to pull his team back 2-1. Then the youngster set up Robinho dramatic goal at the very end of the game at Ewood Park.