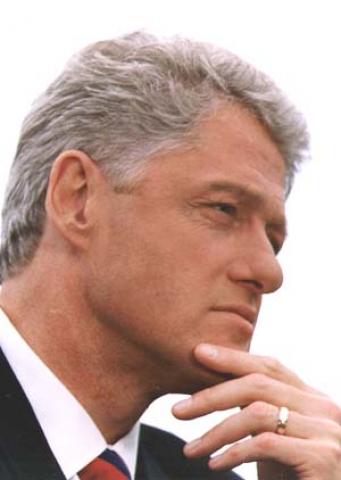 Bill Clinton served as the 42nd president of the United States in the years 1993-2001. Clinton is an Arkansas born lawyer. A huge economic boom characterized his term as president and this earned him a second term in office.

Born on August 19, 1946, Clinton beat all odds including the death of his father to become one of the most influential people in the world. The man who was born William Jefferson Blythe, but later took the name of his stepfather "Clinton".

Any United States president is bound to attract world attention and Clinton got his fair share albeit for all the wrong reasons. He was implicated in an extra-marital affair with White House intern Monica Lewinsky that almost brought down his administration. That aside his administration shaped the world in a unique way. The Clinton administration negotiated world policies with a gun on one hand and a flower on the other.

In most cases, diplomacy was used. For instance, during the crisis in Bosnia, he resisted the urge to use military force. After peace negotiation, he included the American forces in the UN peacekeeping force. He also used diplomacy to convince North Korea to stop making nuclear reactors that could have led to the manufacture of nuclear weapons.

However, he wrongly intervened in the Somali crisis, which led to the death of American Special Forces and the shame that followed of their bodies being dragged around. He also used force to destroy terrorist camps in Afghanistan and Sudan.