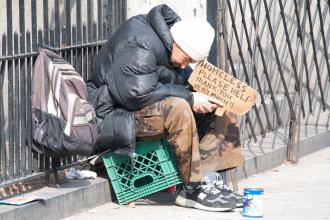 A homeless, mentally ill  man literally weeps after begging hundreds of passers -by for help in New York city. Many of the people ignored his cries, other shouted curses  at him…one lady told him to “get out of the way”. Congress has no idea or clue what it is like to live in extreme poverty in America. They ignore it – like it doesn’t exist? Worse they blame and target the people receiving food stamp assistance?

On October 29, 2013 Rep. Dan Kildee of Michigan asked for permission to address the United States House of Representatives for one minute regarding the cut in food stamp assistance to desperate American living in poverty- most of which are children by the way.

“Mr. Speaker, this week, unfortunately, food stamps will be cut by $5 billion. We expected that. What is worse is that even deeper cuts could follow. Conferees start negotiating a farm bill this week, and billions of dollars in cuts–in fact, $40 billion–have been proposed by Republicans in the House, which is 10 times the number of cuts passed in the bipartisan bill in the Senate.”

“Since I have been here in Congress, I have talked to dozens of people in my district who have come up to me and said, Thank you for fighting to preserve the food stamp program. I have never told anybody, they say, but I received food stamps at one point in my life, so thank you for fighting. I am afraid that many Members of Congress simply don’t know what it is like to be poor in America”, he said.

“These are real people–real human beings. The cuts that we contemplate here are not numbers on a piece of paper but are cuts that would literally take food out of the mouths of people who are hungry.  This is wrong. It cannot stand. I urge my colleagues to fight to preserve this important program” (source: Congressional Record http://thomas.loc.gov).

Filed under: News, Politics
Share Tweet Pin G Plus Email
previous article: How Crucial is it for you to Seek Skilled PHP Application Developers to Create Secured Applications?
next article: Misuse and abuse of prescription and over the counter medicines are at “epidemic” levels says “Senator Grassley