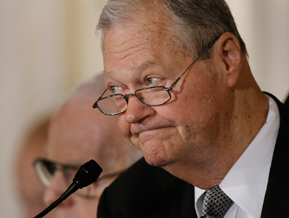 “The Department of Defense lost a lifelong friend yesterday with the passing of former Rep. Ike Skelton”, said Secretary Hagel.

“The Department of Defense lost a lifelong friend yesterday with the passing of former Rep. Ike Skelton. His leadership of the House Armed Services Committee, and his passion for our men and women in uniform, helped make the military he loved stronger. He will always be remembered for his commitment to bi-partisanship, his work to get our troops what they needed to succeed in battle, and his belief in the importance of professional military education. He will be missed by so many of us. Our service members, their families, and the people of Missouri have lost a staunch advocate. My thoughts and prayers are with his wife Patty and the entire Skelton family”, said Secretary Hagel (source: DOD http://www.defense.gov/releases/release.aspx?releaseid=16337).

Skelton died at Virginia Hospital Center in Arlington, Va., surrounded by his wife, his sons and their families as well as longtime colleague Russell Orban, who confirmed the death.

The cause was not immediately released.

Filed under: Celebrity, Lifestyle
Share Tweet Pin G Plus Email
previous article: Misuse and abuse of prescription and over the counter medicines are at “epidemic” levels says “Senator Grassley
next article: Pakistan resorts to unprovoked firing in Jourian