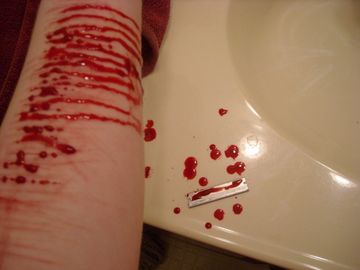 “Dear Mother,
I’m sorry for the bother
I promise I’ll be good
I promise everything will be as it should
I’m proud to say I’m gone
Writing suicide notes and so on
I never really understood life
But maybe I should
Emo fag, Scene kid drag,
Playing with the knife on my wrist
Is just simple practice
I’d hate to be you and father when you find this
I realize if I’m dead,
Everything I wrote in here will be in your head
Just to let you know
What’s on my mind
Writing suicide notes all the time
Never having the guts to try.”
Source: Emo suicide poem, posted by Emo youth on Facebook.

Suicide(Latin: suicidium, from sui caedere, “to kill oneself”) is the act of intentionally causing one’s own death.  But there is another type of suicide that is much more subtle. It affects millions of people who would otherwise not generally be considered suicidal, but they clearly are!

I see this a lot in the EMO youth subculture particularly. The emo subculture is a combination from the punk rock and the hardcore tendencies. From etymological point of view the name “emocore” comes from emotional  hardcore and its roots are in Washington in the middle of 80s. For founders of the “emocore” tendency could be shown Rites of Spring, Embrace and Rain. The emo culture continues to develop and in 90s till today it continues to be popular for the young people. A whole teenage generation succeeds the name emo and the young people start to call themselves emos. The melodramatic behavior and clothes introduce a new taste to the music. This disturbing subculture within society  is maybe one of the most popular and the most obsessing the mind of young people today.

Many EMO youth I have talked to (or tried to talk to) have resigned themselves to live in what I call the “suicide zone.”. For example, EMO “cutters” may be in very serious and chronic pain but have decided, for whatever reason they have little or no real purpose in life and nothing really significant to look forward to or share in life.

Compounding the problem of many ways is the fact that EMO have an entire subculture online to act as their support group. They are in many cases just as disturbed as they are, and they support each other in their disfunction.

This is not to say they can’t be helped, because they can in many cases its just more difficult to do so.

The EMO subculture is marked by peculiar characteristics:

1) They are usually very pessimistic and hopeless in life – generally speaking.

2) They find little meaning or purpose in their life.

3) They show or demonstrate weak motivation to persist in efforts at positive living.

This symptomology varies among victims, depending on the individual. 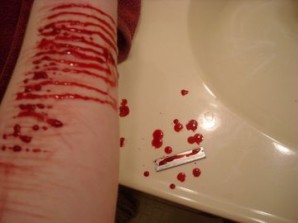 EMO poem about cutting and self harm:

“From start to finish I wonder why, The cuts look good in this messed up lie
The blood that trickles down my arm, People all stare at the girl who self-harms:-

“The emo” they call me, I turn to my name
They act out slicing their wrists, I hang my head in shame
I can’t help my feelings, Of being alone, I hide myself for the day
Just longing to go home, I sprawl on my bed
With my razor in hand, And take myself away
To a much better land, I stare in the mirror
And let myself cry, Looking forward to the day, That I finally die”, Danni

How to help EMO:

First realize many don’t want help, they have embraced a lifestyle much like a convert to a new religion or worldview. But in those rare cases they do reach out for help you can use the following guidelines:

1) Listen actively to them without being judgmental and without diagnosing them. Never, I repeat never use statements like “What is wrong with you?” Because they will shut down on you if you do!

2) You must resist the temptation to tell them what to do or how to live their lives. EMO, generally speaking hate authority figures and resent advice, particularly from older people in generation x and y.

In terms of treatment for such individuals know that psychiatric drugs can become part of the problem. Diagnoses like bipolar, anxiety and severe depression have skyrocketed recently and are being applied to younger and younger people. Which for me personally is a very disturbing new trend, driving largely by the greed of pharmaceutical companies. As a result we have tens of millions of young people taking antipsychotic medications at a time when their brain is undergoing development.

Medications so called may help reduce symptoms but they don’t address life issues, problems or produce cures! And in many instances psychiatric medications don’t work at all, or in rare instances can make matters worse, particularly with regards to suicide and suicidal ideation.