In Superman comics, vicious criminals were sentenced to the Phantom Zone, an interdimensional vacuity where they’d sit listlessly on benches for centuries. Such a fate befalls failed Republican candidates and ex-Commanders-in-Chief.

Jimmy Carter built houses for the poor, supervised elections on two continents, wrote an incendiary book about Palestine — plus the first novel by an American president, and the first collection of poems! Bill Clinton lost weight, traveled the world, started a dynamic, if somewhat vague foundation, won the 2012 election for Obama. Al Gore grew a beard, divorced his wife, taught at Columbia, gained weight, made a crucial documentary, started a TV network. When liberals lose, it’s an affirmation of sorts. When reactionaries are beaten, they’re nullified.

Why do aging Republican fade out? Is it stoicism, humility or shame? We’ll never know. Their memoirs, when they belatedly arrive, are ghostwritten and emotionless. Fox News zealously avoids them like so many right-wing transvestites. 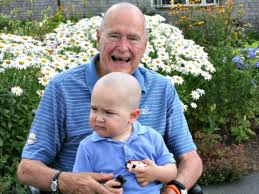