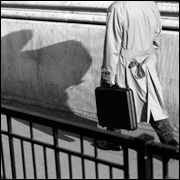 Special Agent James Dougherty has a dozen years of experience investigating spies, and in almost all of the cases he has worked, the subjects’ families, friends, or colleagues had concerns but failed to report them to authorities.

“The FBI needs the public’s help to fight *the insider threat,” Dougherty said, “and we are willing to pay for that help.”

In some cases that amount is substantial!

Individuals who provide information leading to the arrest and conviction of a spy—or to the prevention of espionage—are eligible for a $500,000 reward.

“There will always be espionage cases,” Dougherty said recently. “This is a war that can’t be won—it can only be fought. But we can never give up the fight. That’s why we need the public’s help…”

* Note: An insider threat arises when a person with authorized access to U.S. Government resources, to include personnel, facilities, information, equipment, networks, and systems, uses that access to harm the security of the United States. Malicious insiders can inflict incalculable damage. They enable the enemy to plant boots behind our lines and can compromise our nation’s most important endeavors.

Over the past century, the most damaging U.S. counterintelligence failures were perpetrated by a trusted insider with ulterior motives. In each case, the compromised individual exhibited the identifiable signs of a traitor – but the signs went unreported for years due to the unwillingness or inability of colleagues to accept the possibility of treason.

Insiders convicted of espionage have, on average, been active for a number of years before being caught. Today more information can be carried out the door on removable media in a matter of minutes than the sum total of what was given to our enemies in hard copy throughout U.S. history. Consequently, the damage caused by malicious insiders will likely continue to increase unless we have effective insider threat detection programs that can proactively identify and mitigate the threats before they fully mature.

If you suspect economic espionage, report it to the FBI at tips.fbi.gov