The Finality of an Era…and We’ll Miss You, Joe….. 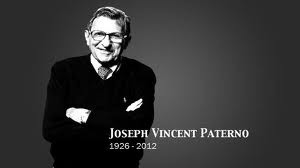 It finally happened. A day that many of us thought surely would never arrive…has come. What can be said that has not been written and reported at this point? Joe Paterno, former head coach of the Penn State Nittany Lions, has died at the age of 85. A college football coach died today. I still, personally, find it hard to say, "former," before the title of head coach. Yes, he was summarily dismissed from his position after 46 years as head coach and 61 years overall. The Board of Trustees saw an opening several months ago – one they had been waiting for that they assumed would never come – and took the opportunity to finally, once and for all, force Paterno and Penn State into the 21st century. After a particularly dismal 4-7 season in 2004, they called for him to step down. This was, by most accounts, going to be the proverbial ‘straw’ that would break the hold on the head coaching job and finally get Coach Paterno to step down. He met with the Athletic Director…and refused. Joe told him he would retire when he was ready…and not before. His answer to those critics? The team took the field in 2005 under his command and proceeded to rack up 11 wins to only one loss. Those critics? Yes…a long, pronounced silence. That was until 2011 and a former defensive coordinator gave the administration said opportunity. I find it sad, as many of us do, that more had been written and reported about Joe Paterno during the scandal than the perpetrator of the crimes. Rather than crucify the man who allegedly performed those heinous acts, we publicly humiliated and dispensed with a man that had given more than anyone to the university. I cannot discuss THAT again – I’ve already let my feelings be known months ago.

What has made a lasting impression, though, on many is that this man put in more years at one university…one job…than many people can imagine. 61 years? 46 as head coach? THAT is why we have seen the end of an era today. Gone are the days, especially in college athletics, of someone holding a job for that duration. That 4-7 season the Nittany Lions suffered through back in 2004 would have cost many lesser coaches their job. As it is widely known, I am one of the Crimson Tide faithful here in Alabama. We have a coach now that we would love to keep for, well, as long as he wants to stay. Why? Because he is winning. In a time when money is tied to the winning percentage, the school needs wins…and will pay handsomely for them. From 1992 through 2006, Alabama went through a slew of coaches…because they didn’t win routinely. For almost half a century, Joe Paterno helped make Penn State football his lasting legacy. He taught ‘Success with Honor’ – a credo that had come under fire recently – though I say he always was, and will be, honorable in both word and action. 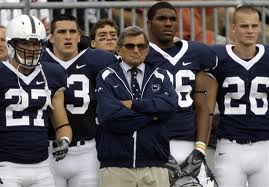 Seen here with his players, they became his staunchest supporters. He molded them into men…and not just on the football field. The loyalty and pride of a Penn State graduate is infectious and fierce. While this is true with many schools, the Penn State faithful do so knowing that their beloved program and coach were never the focus of, nor were there any sanctions by, the NCAA. Joe made academics important, too, and had one of the highest graduation rates for his players consistently. The program was built around his leadership…and today, that leader was silenced with a finality we all understand, yet find hard to accept.

It’s hard not to draw comparisons between Joe, Bear Bryant, Bobby Bowden, and Eddie Robinson. These men gave their all to their players and schools with fiercely loyalty and passion. They were all, in my opinion, men of class and character. Perhaps that’s why they were always among the winningest coaches in the college game. We watched Bear Bryant, as he retired, tell folks that, "I’d probably croak in a week if I ever quit coaching." His love for his players, his school and the game was that great. Bryant died just 37 days after announcing his retirement. I often said, as did many friends and PSU faithful, that we thought the same thing might happen to Joe. He was forced into retirement on 11/9/2011. Less than three months later, we’ve lost Joe, too. In interviews on ESPN today, several people made comments with the same general theme – they believe Joe died of a broken heart. I think so, too. He left a loving wife, Miss Sue, 5 children, and 17 grandchildren. They were there until the end…and never broke his heart. It was, sadly, the loss of the thing he loved most – working with his players, the schools, the supporters. Those were the things that sustained him daily, along with his personal family, and he simply missed the loss too much. 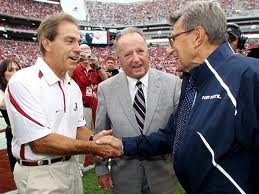 We went to Penn State earlier this season. We got to see the final Alabama-Penn State game that Joe would ever coach. It would be his final loss. After that game, his team proceeded to run off a string of seven more wins before Joe was told he would no longer be the head coach. I’m glad we went. It will be something I will be able to tell my kids, grandkids, and great-grandchildren about in the years to come. It will be important enough for me to tell them because I still believe Joe epitomized, "Success With Honor." He was a man of class and character…and regardless of what has been said in the past three months, should be remembered as one of the best ever. He finishes with more wins than any coach in college football history – 409. He coached more games than anyone, with the exception of Amos Alonzo Stagg. Look it up – it’s a big deal. He tied Stagg’s record….and had the Board of Trustees had any soul, they would have allowed him to coach against Nebraska for the record.

It was asked today, of a former player, what Penn State lost this morning. "They lost their heart." For a man that gave his life to the institution…and to anyone that was a fan, or even a resident of the Commonwealth of Pennsylvania, we know that to be true. RIP Coach Paterno. Say hello to the Bear…and the two of you start preparations for when the rest of us join you. That’ll be a game we’ll want to see again.