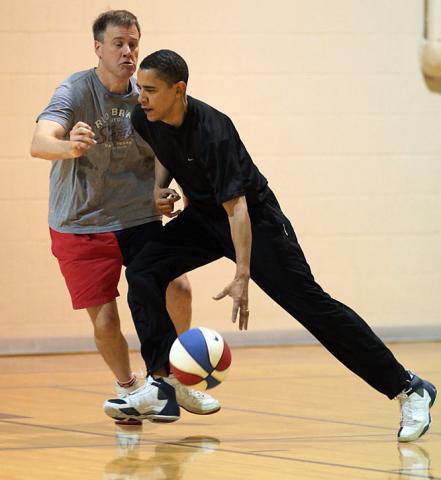 The US presidency is probably the most stressful job in America today. The US president is sworn among others, to execute the laws of the land and to do justice to every man. These sworn duties are indeed very stressful for anyone who is tasked to lead the most powerful country in the world. For President-elect Barack Obama, he has to find ways to reduce the stressful nature of his job by playing his own game. And the name of that game is basketball. A good number of US Presidents have set up new sports facilities in the white house to accommodate their own chosen sports. Richard Nixon was a bowling player and he had a new bowling alley installed in the white house grounds during his term. Gerald Ford had a new swimming pool built to accommodate his swimming exercise to keep himself physically fit. The presidency is a “killing job” because of the amount of stress that goes with the job itself. Booing, the largest aircraft maker in America had a history of untimely deaths of their CEO’s and COO’s while in office because of too much stress that is associated with their jobs.

President-elect Obama has been playing basketball since he was a little boy. In Hawaii where he was born, he would spend hours playing pick up basketball in cracked and dilapidated courts, learning and enjoying the game. In high school, he played for his Alma mater Punahou High School. During his playing time with the school, the team emerged as top winner vesting other schools in the category. Obama was credited with just 2 points though, primarily because of his short playing time.

Tired and worn-out from campaigning in different locations in the countryside during the grueling election campaign, Obama had to “sweat it out” and recharge for another grueling day of campaigning. First thing he does for exercise is to play the game of basketball. He played with his staff and friends from the locality where he was campaigning. These brief basketball encounters is transformed into a series of community events that usually spring from a game of basketball. He would summon local party mates and friends to constitute a playing team and in no time, new game is played. In the process, bonding is developed among team mates and even from those in opposing team.

President-elect Barack Obama is moving into the white house soon to assume the highest government office in America. One of things that are probably in his wish list is a new basketball court where he can play the game with his staff and friends. Obama is a health buff and spends almost an hour a day to keep fit.

The game of basketball is a physically demanding sport. One has to use his body and skill to be competitive. Running from end to end of the court and chasing the ball demand so much physical endurance from the player. This is equally true in the US presidency where mental alertness and physical endurance are needed. Obviously, President-elect Obama has such presidential qualities.

Filed under: Politics, Sports
Share Tweet Pin G Plus Email
previous article: China: Who to Blame for Deadly Subway Tunnel Collapse?
next article: How to Prevent the Death Of Expectant Mothers