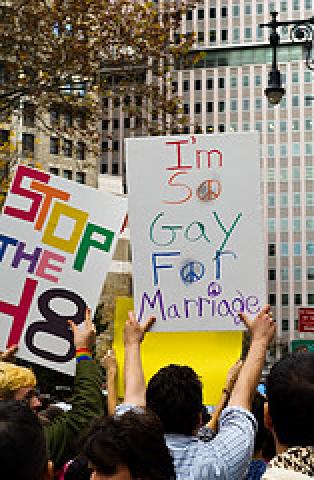 "Do not separate text from historical background. If you do, you will have perverted and subverted the Constitution, which can only end in a distorted, bastardized form of illegitimate government."
James Madison

In a unanimous decision, the Iowa Supreme Court has upheld a lower court ruling granting civil unions for gay couples in the state citing the "equal protection" clause of the U.S. Constitution as their basis. In addition, in writing for the Court it wrote:

Iowa lawmakers have "excluded a historically disfavored class of persons from a supremely important civil institution without a constitutionally sufficient justification."

To this writer, this is just simply another example of a "political" rendering by an activist court acting outside the restraints of their Constitutional duties of office. Per Madison’s quote above, any and all decisions reached by the Court’s in any state in this nation must be considered with the intent of the founders also in mind above all else, otherwise we do not have Constitutional government, we have a "bastardized" form of it.

Insofar as the position that this is an "equal rights" issue, and that the "equal protection" clause of the Constitution would apply in such a case, I would also take exception. The "equal rights" and "unalienable" rights the founder’s were referring to were those given to citizens by the Creator, a Creator which they acknowledged, although some were not Christians, merely deists – believers in God.

Marriage also as an institution "legally" is defined according to the common law of England at the time of its signing and as preceded by the Magna Carta.

The "freedom" to marry anyone and everyone you wish was not one of those they were referring to.  Utah was deemed inadmissible as a state unless and until it discontinued its historic practice of plural marriage for just such reasons due to its Mormon roots.  What’s next?  The gays acknowledge the "unconstitutional" issue of plural marriage, but not basic biology and nature’s law in simply this issue?

God actually has already spoken on this issue, and gays were in existence at the time the Constitution was signed. The gay population has existed since Rome and biblical times, and even the Romans – a pagan nation – did not afford marriage rights to gay couples. The slavery issue was fundamentally different, and was a matter of contention from the time of the original Constitutional Convention. Slaves were considered "property" instead of "people."

As such an entirely different matter, and the civil rights movement of the 60’s had to do with equal rights in the workplace and was not a gender issue, but a racial issue affecting both sexes equally due to hiring practices and other discriminatory issues and leftover biases after the Civil War era.

As far as "equal protection," Iowa is a no-fault divorce state. So there is no "equal protection" in any manner whatsoever for the parties in a marriage "contract," which is what a civil union actually is. None whatsoever.  "No fault" divorce basically took care of "fault", even removing protections in the event of of adultery or abuse, "violations" of both covenants and contracts as a "breach."  Such removals haven’t  historically boded well for the children in many instances of traditional marriages in this country since those protections were progressively removed that these civil "unions" and contracts were actually originally meant to protect.

In fact, the divorce rate in traditional marriages has soared to now over 50%.

And insofar as any supposed "privileges" of married couples, gays also have those too.  Powers of attorney for most legal matters can be assigned to your next door neighbor if you wish, either limited to one legal transaction or a general power of attorney over any individual’s legal affairs.  Wills can be prepared for property or inheritance issues, and anyone can purchase property under "joint tenancy" or hold "joint title" to cars or other significant property.

For tax issues, there is the "head of household" option also and many married couples file separately if income levels are such that it is more advantageous to do so.

You don’t even need a lawyer for any of the above, since most standard wills and powers of attorney can be purchased for a relatively small cost at your local bookstore or even online.  And most married couples still need to execute these documents in the event of hospitalization or any other legal matter which are included in hospital admission forms that have such powers of attorney built into the forms themselves.

So what "privileges" do the gay community perceive are lacking, or just what "equal protection" have they been seeking?

If there were or are any under Iowa law, the proper Constitutional method would be addressing those, and actually getting those laws readdressed and rescinded.

Gay couples can adopt, and the adoption papers themselves protect rights of inheritance as a traditional couple’s adoption would.  I’m really perplexed at just what they feel is missing, other than social acceptance – which cannot be legislated on any level.  In fact, they have now "invited in" the government to their union, rather than protect it from governmental interference.  Sort of like cutting off your nose to spite your face.

This new "law" is really nothing more than another Lawyer’s Economic Act for the domestic relations attorneys in Iowa.

Be prepared now for more challenges across the country, since there is a federal statute which affords attorneys in this country their legal fees for matters which can in any way be tied to "civil rights," whether or not they are valid challenges anymore doesn’t seem to be the issue – since the state courts don’t seem to be evaluating many of these cases on merits or the Constitution in any way whatsoever as of late.

Even the Supreme Court now has become more political and less Constitutional in their findings it seems more and more by the year.  Now going so far as to use even foreign country’s holdings in their deliberations rather than the Constitution and it’s provisions.

This was nothing more than a political rendering by a rouge court, and I would guess for the pure benefit of the national attention and recognition many involved in the case would get, and also for the benefit of the Supreme Court members "associates" in the legal industry who were defending the case.  The State was appealing the lower court’s decision, therefore, the attorneys involved for the "non-profit" organization who originally brought the action potentially would be entitled to their legal fees courtesy of the American people.  Purely political.

Marriage is an "institution" with it’s foundations in the common law of England. on which our Bill of Rights is based – with the exception of a few provisions thrown in with respect to the right to bear arms, free speech, and assembly, and jury trials for all civil and criminal matters which were not afforded in the sovereign nation of England.

It is God actually who set his plan for marriage in the creation of Adam and Eve. Although the federal government may not interfere in the religious beliefs and practices of citizens in this country, there was never any intent to remove any and all mention of God in our public institutions, or in the laws of this country. None whatsoever.

That provision was merely included in order to prevent a "State" or nationwide religion as had occurred in England, and avoid the dissention that had historically occurred in fights between the Catholics and Protestants, and the Church of England. In fact, Benjamin Franklin in his speech prior to the ratification of the Constitution makes mention of the fact that it was sectarian differences they were wishing to avoid with the arguments over religion in the first place.

And the false Christianity which had been historically practiced in England which had persecuted subjects of the crown in wars and religious tests of loyalty to God or the sovereign repeatedly due to those same sectarian differences.

But even absent any religious bias or basis at all but simply on legal grounds, with all the rights and privileges under Iowa law available to the gay community which have already been provided under the commitment statutes, and powers of attorneys, wills, joint tenancy and joint title provisions for property, this entire movement seems rather ludicrous at this point.

The truth is the gay community are actually asking the government now to get involved in their personal relationship, and it’s dissolution if and when it ends, and it will be the legal community that will most benefit from these provisions I guarantee.

That and the state for the license fees in order to "permit" gays to marry.  And if even 1/3 of these unions end up dissolving, all those taxpayer costs for the increase in judges and courts – not to mention the legal fees which will reduce the amount of property accumulated in these unions.

Be careful what you wish for.