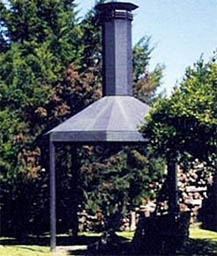 La Plata, Argentina — The old adage that necessity is the mother of invention is one Guillermo Gomez-Romeo, grill maker and owner of the custom barbeque supply shop Pigue, has taken to heart.

In cow-obsessed Argentina, where per capita consumption of beef hovers at 150 lbs per year, the highest in the world, the custom grill or parrilla business should be as pervasive as the smell of charcoal on the air at lunch time.

Mr. Romeo, a blacksmith who used to build mobile homes, explains however that his shop was the first of its kind in La Plata.  “I got the idea 16 years ago in a metal shop in Buenos Aires.”

Tired of losing money to cost overruns and skyrocketing inflation in the turbulent Argentine economy, Romeo says, “I wanted to do something small and no one else was making parrillas to fit.  Now others imitate me.”

Looking across his shiny “boutique” showroom floor on which the panoply of grills and accessories, crafted in the noisy workshop adjoining, are neatly displayed, he describes the part of his work he most enjoys.  “I like first, coming up with the idea, and then, the design.”

In his workshop, one man is busy spot welding a rectangular chimney while the other makes the final measurements on a doorway to a quincho, a space for grilling meat which can reach the size of a pool house.

Romeo points to a metal-works machine he invented to cut the circular parts he needs for the chimneys of his larger grills, including the quinchos.  “In Argentina, we cannot afford to buy the latest in machines and equipment, so we have to improvise.”

“I like the challenge,” he continues, “of a new or strange job.”  He insists, however, that “Once I make the parrilla and test it, I don’t think anything more about it.”

Testing procedures for Romeo include preparing an asado, the festive Argentine version of a barbeque that blurs the line between meal and ritual, for his clients and then tasting the meat.

Romeo explains that the process for making his parrillas, from the ordinary (think of a backyard Weber but square) to the extravagant, (imagine a metal-framed, glass-windowed hut with a pair of asadors, metal poles with clasps that look like bear traps and are adjusted by notch to move toward or away from the fire, standing in the middle) is the same.

“I take common metal and bend, weld, drill and polish it into, at most, 16 different parts that can be used on any of the grills.”  Romeo’s calloused fingers wave through the air as he continues, “From the time I give a customer an estimate to the finished product takes one week.”

“But,” he says, returning to his office, “my elbows hurt from years of banging on metal, so I don’t really like doing that anymore.

Easing back into the arm chair at his desk, he taps lightly at the keys of his new laptop.  “Now,” he says, “I just stay in the showroom, sell my grills and come up with new ideas.”