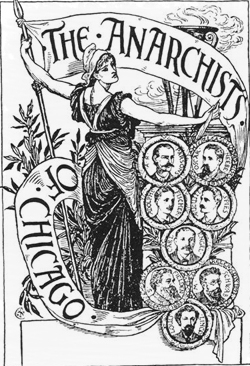 Today, May 1st is considered a holiday around the world. May Day has been celebrated since early pagan days in . It was celebrated as the first day of summer. Today May Day is connected more with the labor movement. The connection started with the Haymarket riot of in 1886.

What was and what caused the Haymarket massacre? In the 1870’s was a leading center for labor. By 1886 unions were forming for better working conditions. They were attempting to get an eight hour work day. This would not come about until the Fair Labor Standards Act of 1938.

For the laborer during this time conditions were poor and unstable. Problems began between factory owners and workers. Competition led to factory owners looking for production that was faster and cheaper. This was accomplished by cutting labor costs. Machinery replaced skilled labor. The factory system of production used separated and unskilled labor. This led to low wages, long hours, and unstable employment. One has only to read Upton Sinclair’s book “The Jungle” to get a feel for the conditions of workers during this period.

On May 3, 1886 a violent incident occurred at the McCormick Reaper Works during a meeting of strikers. On May 4 approximately 200 workers assembled at in , known as the Haymarket. By 10:00 P.M. 176 police officers gathered and ordered the crowd to disperse. A bomb was set off causing shooting to start. When the smoke cleared six officers would die and sixty would be injured from the event. No one knows who set the bomb off or how many civilians were dead or injured. Later evidence showed that most officers were injured by their own gun fire.

After the incident anarchists and socialists were rounded up. Eight men were convicted of inciting the riot through the use of inflammatory speeches and publications. Of these men four were hanged, one committed suicide, and three remained in prison. On June 26, 1893 a full pardon was granted to the men in prison by the governor, John P. Altgeld. It is from the Haymarket incident that anarchist became portrayed as bomb toting radicals. It is also why we celebrate May 1 as a day for workers rights and the labor movement.

If one looks back and compares today with history we can see the correlations. Before the industrial revolution it was the landed gentry and the peasants. Leap forward to the present and we have outsourcing, immigration, and globalization as the problems of the worker. Some things never really change.