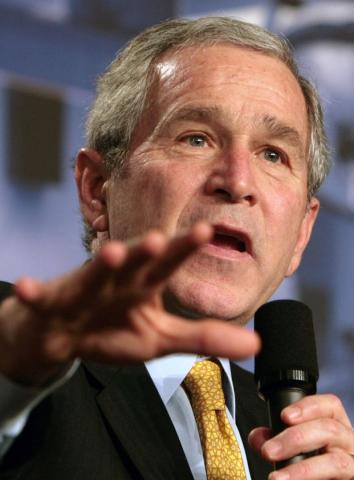 Baghdad, Iraq: Munatazir-al-Zaidi, the Iraqi journalist who hurled the shoes at the US president Mr. George W Bush, at a joint news conference with Iraqi Prime minister Noori Al-Maliki, he also called Bush a dog in Arabic, in Baghdad, a gesture of hatred in the Muslim world against the US president and the policies.

Journalist Munatazir-al-Zaidi, has been in custody, since last Sunday, as long as the dramatic shoe protest took place, that made him an instant sensation and hero in the Arab as well as Islamic world.

On the other hand, the security agents of Iraq and US, to ensure they did not contain any explosive material, examined the shoe and then destroyed them.

Zaidi’s ‘David versus Goliath’ act made him a sensation, not only in the Arab world but in all over Islamic world, where the US invasion on Iraq and Washington’s blind support to Israel have generated hatred in the hearts of the people and deep animosity to Bush.

More than 1,000 lawyers offered their services to defend the journalist.

Apparently, he is in the hospital after the brutal torture of the security agents with one broken arm and ribs, his family told.

Rallies were taken out in the different cities of Pakistan today, where the journalists expressed their solidarity with the Iraqi newsman, who gained fame after the shoes incident.