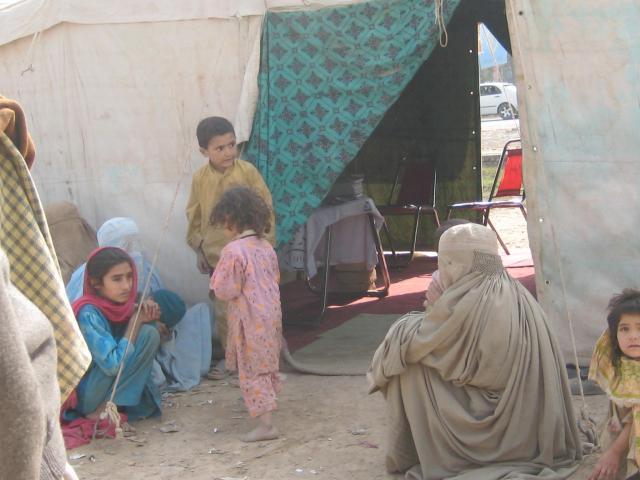 Only the color of the burqas (veils) was different in the Kacha Garhi refugee camp: the Afghan women wore blue and the Pakistani females from conflict-torn Bajaur Agency wear light khaki.

The Kacha Garhi refugee camp was originally set up for Afghan refugees in 1980 near Hayat Abad, the heart of Peshawar, and had housed more than 70,000 refugees until it was vacated and closed in 2007. But soon, it was reopened to the internally displaced people (IDPs), majority of them from Bajaur Agency, who were forced to leave their homes by the fighting between militants and security forces.

According to UNHCR, the U.N. agency for refugees, more than 12,800 people have been registered in four accessible camps. Kacha Garhi is one of them and is now home to more than 1000 families or some 6000 displaced people.

A few days ago, an old friend, Habib ul Hassan Yaad, who himself is from Bajaur Agency, happened to be in Peshawar and we together visited the camp. Another friend Peer Mohammad also accompanied us. An official of the camp, who wanted to remain anonymous because he was not authorized to discuss the camp matters, told us that more than 10,000 displaced people were housed at the camp.

As we reached there, the camp presented a view similar to that when Afghan refugees first came there: long rows of tents; children in shabby clothes playing around; aid agencies distributing things; and the dwellers all complaining.

A big difference between the Afghan refugees and these IDPs was that the former wanted to go back and fight against the Soviets; the latter only want to go back to their homes and live a normal life. They want both the militants and the security forces to end the conflict and want to fight neither.

They condemn the Taliban for killing their elders, for attacking their villages, for raising the war, for destroying their schools, and at the same time, condemn the security forces for bombing their homes and forcing them to leave their Agency, a border area which was as peaceful as other cities of Pakistan before this conflict. I have lived there for several years and I am a witness of the genuine peace people enjoyed there before the creation of the Taliban.

‘I don’t want to live here, in this camp. I want to go back to my home and I want to continue my education. In this camp, we don’t have a school and proper education and I have not any friends,’ said Wahidullah, 15, who is from Mamoond sub-district of Bajaur Agency.

Shabbir Khan, 32, his neighbor in the next row of tents, however, complained about the lack of facilities in the camp. ‘We don’t receive sufficient food, water and medicines,’ he said. Even tents, he added, were being not distributed in a proper way.

‘My brother’s family is registered two days ago, he is eligible to get a tent, but they have not provided it to him, so we two families are living in one tent,’ Khan said.

The official, we talked to, confirmed that the distribution procedure was not appropriate, but added that he was not responsible for that. ‘I am only in charge of construction,’ he told us.

He also took some refugees accountable for this situation because, in his words, ‘they live in Hayat Abad and come here only when something is being distributed and grab everything they can.’

His biggest concern was about the security situation. He told us that a vehicle of an aid agency was recently stolen in broad day light and was not recovered yet.

An Afghan ambassador-designate and an Iranian diplomat were abducted and their drivers shot dead and two foreign journalists were wounded in firing recently at Hayat Abad, adjacent to the Kacha Garhi camp.

The fighting in Bajaur Agency it seems has no imminent end. On Thursday, an explosion in a mosque of Mamoond sub-district, at the village of Badan, killed at least 9 people, including a tribal leader. On Friday (today), the shelling by security forces in Nawagai and Mamoond sub-districts has reportedly resulted in the killing of several militants.

According to reports, some four hundred thousand people have been displaced from Bajaur Agency, among whom more than 30,000 have migrated to Konar province of Afghanistan. Nearly the whole population of this province had migrated to Bajaur Agency during the Afghan jihad. How true George Eliot had said that ‘History repeats itself.’ And in our part of the world, the history of wars and conflicts is a continual repetition.