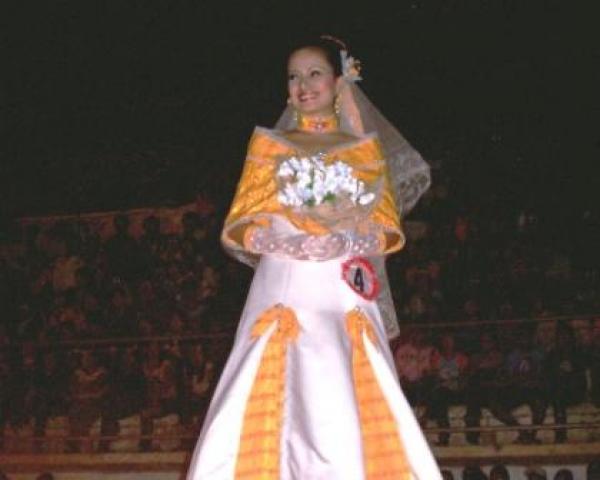 THE LAGA GALA: A Review

But then, it should be. With our very Filipino nature of allowing ourselves to be automatically gripped by any display of spectacle and pageantry, there is no need to find explanation behind the people’s coming in big droves.

As a run-through, Laga was first held in 1995, when Mrs. Natividad Sugguiyao played with the idea of holding a fashion show of clothes with the Kalinga woven fabric as the main material. It was paired off with the search for Ms Kalinga. And since then, the two shows went on to be staged year after year.

Except this year for Ms Kalinga.

Laga outdid Ms. Kalinga as to the continuity of both shows. Ms. Kalinga was shelved, and Laga may have even suffered the same fate had it not been for the enterprising spirit of DTI-Kalinga, which then decided to take on the responsibility of producing the show. DTI Director Grace Baluyan was right in saying during her opening remarks that the province should look into establishing a solid market for the Kalinga native fabric – not only here in the Philippines but in other parts of the globe as well.

Compared to previous versions of the show, Laga 2008 was made highly competitive. Whereas in previous Laga shows, the models were simply required to show off clothes made either entirely or at least displaying some percentage of the Kalinga fabric, this year has a title at stake – complete with a question and answer portion where the participants suddenly transformed from models into contenders in a beauty pageant.

And that is where the Laga Fashion Show went wrong.

When the word “Laga” comes to mind, we immediately think of the dresses that would be paraded before the audience by models. As originally conceptualized by Mrs. Sugguiyao, the clothes (i.e., the Kalinga native fabrics) are supposed to be the real treat during the show, reminding us how the designers went through all the whole process of design, fabric selection, color consideration, cutting, sewing, beading, accessorizing, fitting, and last-minute enhancements.

Models are secondary to the clothes. They are used to show off the merits and good points of the dresses. Otherwise the show should have easily been packaged as a model search. The Laga Show did right in giving out awards such as Best in Casual Wear up to the Best in Formal Attire (Evening gown for ladies and tuxedo for males). The organizers could have then summed up the scores and determined the models who got the most number of awards and bestow on them the titles Ms. Laga and Mr. Laga – which would mean that they were the models who most effectively showed off the given clothes. Had that been the case, we would have left the venue reflecting on how beautiful the clothes were, and how efficiently did the models convey the proper situation in which the apparels should be worn.

But the show took a turn and subjected the models to a Q and A round – with one question running this way: Do you know any Kalinga pattern?

Again: the Laga Show was supposed to have been a showcase of clothes touched by the Kalinga native fabric, with models parading them down the ramp – not the usual search for title-bearers. But as it turned out, the title-bearers became the focal points, and – as is always experienced after a search – uproar of bitterness from the losing camps amplify its way back to the organizers.

Which is not fair. Okay, the show may have turned out differently than what it should have been, but inasmuch as the organizers have decided to bestow titles upon the models, we have to live with it. The question, therefore, is: were the judges right in their choices for Ms. Laga and Mr. Laga 2008?

Answer: Ms. Lorraine Earl and Mr. Dexter Batalao deserve to wear the titles. Ms. Earl managed to win three of the minor awards (School band uniform, bridal gown, and evening gown), while Mr. Batalao consistently performed well on the ramp (he was, in fact, one of the few male models who exuded a confident aura).

So it has become a sort of wonderment why there are people in the community who had the gall to question why – let us be specific here – Ms. Earl was even permitted to participate in the first place.

In the world of fashion, skin color has never been one of the criteria. That is why fashion activities the world over are filled with young men and ladies who hail from diverse backgrounds. Some are imported from as far as the African continent – like Waris Diri, Alek Kwek; the Southeast Asia – like our very own Ana Bayle. The 1990’s saw the very white Cindy Crawford sashaying down the ramp side by side with the very black Naomi Campbell. Models are chosen on the basis of their built and their ability to display the clothes.

The participation of Ms. Earl, who is of Filipino and Australian descent, and her winning performance while garbed in the Kalinga native fabrics, are proofs of the quality of the fabric as a wearable material, regardless of one’s ethnicity. She herself pointed that out in the Q and A round when she talked about the viability of the fabrics in the global market.

The forum and open-chat sections of the Kalinga Tambayan website of Nathaniel Dalanao were filled with differing views on the above-mentioned subject. One chatter said “Kunak man nu pang Kalinga lang ti laga. Apay ngay nga adda simmali nga puraw.” The individual, who was not brave enough to identify himself/herself, may learn a lot by visiting the DTI office and look into the guidelines that the organizers have formulated for the contest. The standing rule was “open entry” – single or married, Kalinga or non-Kalinga, professional model or not.

The administrator of the website, Nathaniel, had to text us to ask for rescue in answering the barrage of messages littering the chat room of Kalinga Tambayan website. This writer logged in and, after answering a few of the negatively tinged messages that border on ethnic discrimination, he logged off and sadly shook his head for the propensity of some people to be closed minded.

This writer, however, maintains that the Laga Fashion Show should have been bare of beauty contest ingredients, particularly the interview portion. If the organizers were really that hell-bent in finding out who among the models would turn out to be the brightest mentally, then they should have proceeded with the search for Ms. Kalinga – but requiring the contested attires to be made of Kalinga native fabrics.

Still, congratulations to DTI Kalinga. We all get better from initial ventures – as they themselves know that in the entrepreneurial training activities that they conduct. Given some lapses in the preparatory stages of the show (like the announcement that sponsors await the prospective models; some early contenders had to withdraw participation upon finding that no sponsors await them), Ms. Benita Mangadap still needs to be lauded for her passion to push through with the show. Along with choreographers Marlon Carbonel and Aquino Gonayon.

Lastly, congratulations to the winning creations of Joon Ascaño who ran away with the Best Designer award for his School band uniform, bridal and evening gown creations for Ms. Earl. Joon received formal training in fashion design at the – the first one to attend that school, and soon followed by Ariston “Chit” Reyes, Marlon Carbonel, and this writer (who did the winning office and casual wears for Ms. Diocares).

Laga, we hope, would learn from the important details that the organizers have overlooked, so that by next year, we will not have chatters quarreling again at the Kalinga Tambayan website – a bad thing for a  province itching to join the  global community.