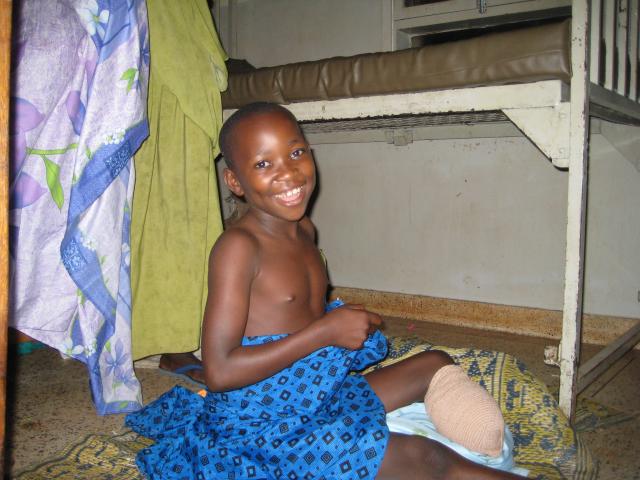 Charles Lwanga- Ntale in a study  "Chronic Poverty and Disability in Uganda"affirmed "chronic poverty and disability in Uganda are inextricably  linked. Despite impressive economic gains in the past 15 years, current evidence suggests that at least 2.4 million disabled persons remain poor."

The study also explored the feminization of disability and noted among some persons in three out of four districts (Mbarara, Mukono, and Iganga) a disability was thought to be a curse brought into the family via women (the mothers of disabled children). As a result, the study pointed out that the common way to deal with a woman who gives birth to a disabled child, is for the man to find another wife.

Wiithout marriage, the study, via anecdotal evidence showed that women who are disabled are condemned to a life of exclusion and poverty.

S.E.Smith writing for the blog FORWARD  http://disabledfeminists.com on Sept.3, 2010 pointed out, "Northern Uganda is emerging from decades of conflict, and as the country works on rebuilding itself, disability rights advocates are very concerned about the role of people with disabilities in Ugandan society. The report documents the conditions for many people with disabilities living in Uganda, and challenges the government to take a more active role in protecting its disabled citizens."

The blogger referred to the  Human Rights Watch  report, ‘As if We Weren’t Human,’ on the violence, isolation, and discrimination experienced by women and  children with disabilities in Uganda.

"Women with disabilities trying to integrate into society are facing an uphill battle as they attempt to leave refugee camps and return to their communities, find ways to support themselves, and struggle with the fact that many communities have been shattered and the extensive social support networks that once existed are gone now. Poverty is a chronic problem for many disabled women that makes it even harder for them to access services they need," Smith wrote.

Pastor Paul Bulenzi, the founder of Beam of Hope For the Disadvantaged, http://www.behod.org  an NGO based in Jinga, Uganda that advocates for the rights of disabled persons, especially women.

The following text is an open letter from Pastor Paul:

LIFE OF THE DISABLED PERSON IN UGANDA:

There is nothing worse in this world as being a disabled person in developing countries.Long ago, all communities in Uganda used to look at people with disabilities as victims of  a misfortune, or  a curse to the community.When a woman gave birth to a disabled child, the husband used to marry another woman in order to give birth to children as a way of protecting his family from another curse due to the fear that the woman will again give birth to another disabled child.

The parents used to keep their disabled children indoors in order to protect them from neighbours and visitors who could spread the news to the whole village which will caused neglect of  such a family by the rest of the village members. The village members used to think that if they associated with such a family, the curse would  be passed from that family to another, hence giving birth to another curse in the village.

The family members used to keep it a secret among themselves in order to keep a good working relationship in the communities where they were staying.This affected people with disabilities so much in that even if the disability was minor, the parents could not get advise from other people or even take children with disability to hospital and as the child grows, the disability also grows since the bones become strong and strong each day that goes by.When it comes to education, people with disabilities didn’t get that opportunity because there was no way of taking such a person to school because they believed that the curse will affect other children. This left people with disabilities with no options other than  begging on streets. Begging   kept them in the cycle of poverty.It also affected their children due to the fact that they could not  take them to school as a result of lack of funds.

According to the research carried out by Beam of Hope for the Disadvantaged(BEHOD) in November 2009, it was noted that 89% of people with disabilities in Uganda were not born disabled but just become disabled at the age of 9 months and above mainly affected by polio, car accidents and ignorance of parents. Most of the parents are ignorant about immunisation and some of a negative altitude about immunisation thinking that if they immunise their children, they will die. To make matters worse, when the child starts to suffer from polio, they take the child to a local witch doctor thinking that the child is beeing bewitched by the step mother insteady of taking the child to the hospital for physiotherapy which just worsen the situation insteady of making it better and the disability keeps on growing and thats why there is a high rate people with disabilities in Uganda.

But as time has passed and people have become more knowledgeable about disabilities,  and they have realized that disability is not passed from one person to another and it is not a curse to the whole community. This more progressive attitude has  become possible due to advocacy for the rights of people with disabilities by the government and NGOs that deal with  persons with disablities.

Beam of Hope for the Disadvantaged is one of the organizations that aims at improving the lives of people with disabilities in Jinja and other parts of Eastern Uganda. Its mission is to enhance the social and economic standards of living among the disabled in qualitative and quantive terms so as to intergrate them in the mainstream society.This is done through providing education, basic needs, computer skills, tailoring skills and life skills to people with disabilities in order to make them self reliant.

As an organisation that advocates for the rights of people with disabilities, Beam of Hope for the disadvantaged carries out community outreach,  and awareness and this is done through a radio talk show, going out to different villages, sports gala for people with disability,and  holding seminars among others.

I take this great opportunity to thank all people who have supported Beam of Hope for the Disadvantaged in all its work of  advocating for the rights of people with disablities because we are what we are now because of your support and the good hearts you have towards people with disabilities. Thanks so much for all the support which has helped to change people’s negative altitude about people with disabilities in Uganda.