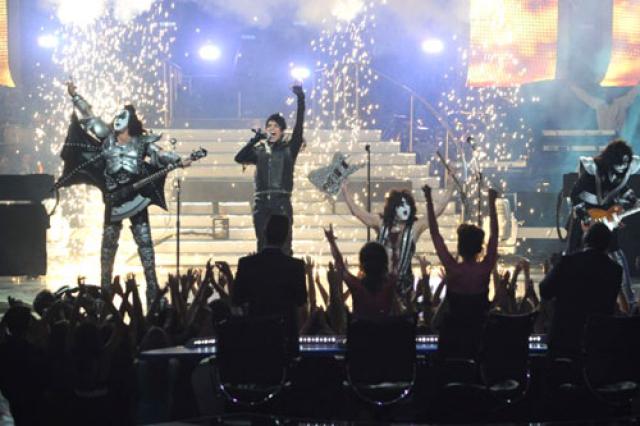 Talk about a shocker!

During an evening where American Idol felt more like American Bandstand with Kiss, Cindi Lauper, Lionel Richie, Rod Stewart, Santana and Queen, (not to mention “Bikini Girl” Katrina Darrell’s sing off with Idol judge Kara Dioguradi and the return of head band loving crooner Nick Mitchell ) America voted for the guy next door, instead of the guy they would peer at through the window.

Really?  How did that happen?

Even a confused Kris Allen seemed embarrassed by his win as Ryan Seacrest asked him how did he feel about his American Idol victory.It’s not that Kris Allen does not have the talent, because he is does.

Allen easily slides into the John Mayer/Rob Thomas category, where his guitar strumming, good looks and folksy pop tunes could make him a VH1 favorite.Hopefully his music producers will give us the real Kris Allen and not another act that sounds like The Fray or Nickleback.

This is why America got the vote wrong.

No offense to The Fray or Nickleback but far too many artists already sound like them. There are too few artists today that looks and sound like Adam Lambert.

A soulful ambiguous singer, reminiscent of David Bowie mixed with the best (and worst) of 80’s glam, Lambert’s “you cannot put me in box” talent, could bring a much needed boost to today’s cookie cutter music industry, where everyone seemingly sings, dances and raps like everyone else.

Some might say that Lambert lost because of his “is he or isn’t he” sexual orientation. Maybe, maybe not, but the real reason could be that America loves the underground and hates the front runner.

Ruben Studdard barley defeated Clay Aikman and his devoted Clay-mates and the original American Idol Kelly Clarkson never had a chance for a true diva battle with Tamyra Gray because America chose Justin Guarani over Gray for the final, (although Clarkson is one the best American Idol’s ever, her final with Guiani was joke).

Yet, if American Idol has proven one thing over he years it is that you do not have win it to be the star. Adam Lambert understood this, along with the fact he got along with Allen and understood he nuisances of rejection based theatrical background and it is understandable why Lambert seemed OK with America’s decision.

It will be interesting to track Kris Allen’s and Adam Lambert’s next career the next four years as well as rocker Allison Iraheta and R&B crooner David Gokey. All four have the talent to have long musical careers, but in reality only one and most two of this group will be successful.

Maybe this will be the year four or even five former idols find success.

In an unexpected season, where a David Bowie type of performer dominated the season, but like Bowie fell to the earth, American Idol reaffirmed itself as one the best reality show on TV.