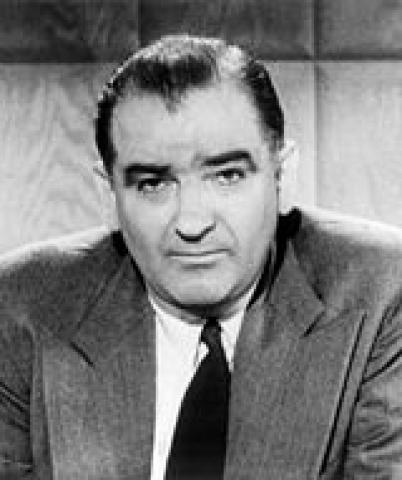 In the early 1950s, Senator Joseph McCarthy, a Wisconsin senator, attempted to gain political "capital" by playing on America’s fear of communism. He formed a committee called the House Unamerican Activities Committee and this unseemly version of the Spanish Inquisition began. A witness did not have to be a card carrying member of the Communist party to be bullied and shamed during these hearings. Perhaps one had written a play, a book, been seen in a photograph standing beside a suspect, gone to a meeting or tangentially known someone who had gone to a meeting. Anyone to refuse to answer a question or simply lacking the desired information, was labeled treasonous and could be thrown in jail. Many lives were ruined groundlessly. At last this witch hunt ended when the press (chiefly Edward R. Murrow) and colleagues put an end to it, and to the career of Joseph McCarthy. America did not become Communist because America has made that choice. And in fact the tactics of McCarthy were a disconcerting distraction from attention to any credible threat.

"McCarthyism"" coined in 1950 in reference to McCarthy’s practices, was soon applied to similar anti-communist pursuits. Today the term is used more generally to describe demagogic, reckless, and unsubstantiated accusations, as well as public attacks on the character or patriotism of political opponents. "Wikipedia"

His primary achievement has been in confusing the public mind, as between the internal and the external threats of Communism. We must not confuse dissent with disloyalty. We must remember always that accusation is not proof and that conviction depends upon evidence and due process of law. We will not walk in fear, one of another. We will not be driven by fear into an age of unreason, if we dig deep in our history and our doctrine, and remember that we are not descended from fearful men.  We proclaim ourselves, as indeed we are, the defenders of freedom, wherever it continues to exist in the world, but we cannot defend freedom abroad by deserting it at home. The actions of the junior Senator from Wisconsin have caused alarm and dismay amongst our allies abroad, and given considerable comfort to our enemies. And whose fault is that? Not really his. He didn’t create this situation of fear; he merely exploited it — and rather successfully. "Wikipedia"