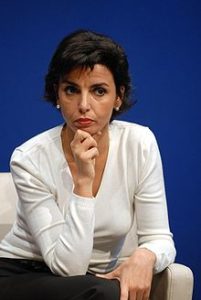 Christiane Taubira in the National Assembly after the vote on the Gay Marriage law.

Ever since George Orwell described the practice of doublethink and newspeak in his novel 1984, politicians of all stripes have made it their business to perfect the art of saying one thing while meaning something else entirely. They have, to their immense profit, used 1984 as a textbook rather than as a warning, taking to it with real vigor and professional pride. It’s now a kind of hobby in which they try to outdo each other. Those who master it go a long way on coded messages and innuendo. (Maybe we should call it “turning things inside out.”) With our current debate over “freedom” vs. “security” we may even have entered a golden age of doublethink, the ability to hold beliefs in complete contradiction to their stated objective. (“I am in favor of freedom, and in order to remain free the government must read everyone’s private communications.”) Even so, you can still be startled by individual instances of the craft, when its practitioner scores a bullseye.

“Doublethink means the power of holding two contradictory beliefs in one’s mind simultaneously, and accepting both of them,” Orwell wrote. Here’s a current instance of the phenomenon.

Christiane Taubira is the Minister of Justice in the Hollande government in France. She is a visible and even controversial cabinet minister. She is also black. Given her public stances on issues such as gay marriage and prison reform, she is a lightning rod for discontent during a time of financial crisis, when the French, like people all over Europe, are disgruntled and like to point the finger at “foreigners” they think are stealing parts of the pie. (She was born in Guyana and has represented that country in the French Assembly.) She is insulted on a regular basis and was in October compared to a monkey by a member of the Front National, who has since been drummed out of the party.

A new report is out about racism in France. It has caused a bit of a stir since it was released earlier this week, with its color coded charts depicting town and cities where varying degrees of discrimination exist. Populist and rightwing politicians have been quick to seize on the report for their own ends. Which brings us to this week’s Golden Doublethink, courtesy of Rachida Dati, a member of the populist UMP. (The full report, in French, is available here.)

“The French are not racists. The elites, yes. I believe they put Christiane Taubira in office and make use of her in order to give themselves a clean conscience.”

A classic, rife with contradictions. The French people are instantly freed of responsibility while unnamed elites, whom every populist must run against, are blamed. The virus is somehow magically contained within this small (by definition), shadowy (by insinuation) group, who, since they are never defined, are easy to hate. (And who, it must be said, provide the money for every political party in France.) And not, it is implied, just any elites but left-leaning elites of the sort running the government now, who are putting Christiane Taubira through her calvary.

Voilà! Ms. Dati subtly asserts that it is the appointment of Taubira that is causing the fuss. She is a diversity hire. Cynical elites are using her as a salve and a battering ram. Subtract Taubira, her statement insinuates, and the problem goes away. The same sort of talk is going on in the conservative press about Harlem Desir, also black and the current spokesman for the Socialist party. Unfortunately for the UMP, all of this “Make the World Go Away” talk leads straight to the Front National and not to them.

Alert readers have already grasped that the rigorous practice of doublethink requires leaving as much up in the air as possible. Insinuation is a subtle art. Definition is the enemy, shadowy forces your friends. Facts and clear opinions are verboten. Dati does not offer an opinion on Taubira or criticize her positions but instead suggests she is the object of an ill-defined conspiracy. Not a lot of sisterhood there, folks.

Behind much of this is, of course, the divisive issue of gay marriage, which is now legal in France but nevertheless provoked large demonstrations in opposition all across France both before and after its enactment. A perfect issue to seize on, because, while it affects a small percentage of the population and changes nothing substantial, it rallies people to the cause. Whatever that cause may be.

But as to elites and their shadowy machinations Ms. Dati perhaps knows whereof she speaks. The politician, who runs Paris’s bougie 7th arrondissement and is of North African descent, was, as it happens, Minister of Justice in the Sarkozy government from 2007 to 2009. To her our first Golden Touché.
*
I’d be interested to hear from readers about doublethink, if they know of current instances. A weekly column on the subject seems possible, or, if they are familiar with French politics, perhaps they strongly disagree with my diagnosis. Either way, let me know and we’ll make more statuettes.