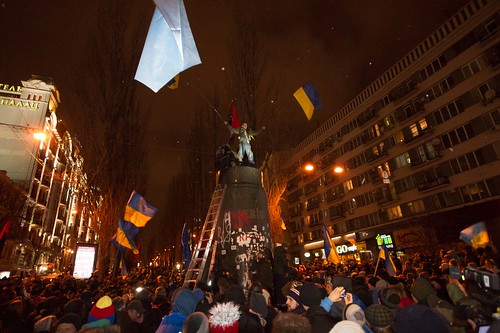 Lately the world has seen a series of protests that have sparked from groups of individuals with little to no say in governmental affairs in order to finally make an impact, whether successful or not.

The prominence of protests today

In this year alone, Haitian demonstrators hit the streets to demand the resignation of President Michel Martelly, and Thailand protests succeeded to dissolve parliament though their goal is still to find a new form of government. Most recently, hundreds of thousands of activists in Ukraine are protesting against President Viktor Yanukovych, who is leaning more towards entering a trade deal with Russia instead of joining the EU.

Every country has different causes for rallying, and yet we’re still witnessing the protests spread like wildfire globally and also faster than ever before. How do we explain the global domino effect of demonstrations?

Youth and the Internet

The millennial age group has expressed time and again its desire to change political infrastructures that restrict the say of the people. This certain age group is highly influenced by media, particularly of the western culture. Eventually, a combination of political corruption and a desire to have similar social justice liberties as those portrayed in the Medias results in the sparking of protests.

The easiest and fastest way for this new tech-savvy generation to inform itself is through the Internet. Thanks, to social media and online news outlets, people are up-to-date on global affairs. This results in two things:

1) Countries under strict government rule are well informed of countries with governments set up to favor the voice of the people. A sense of hope is gained, causing people to have similar desires of living in a country where freedom is a human right.

2) Social media allows the sharing ideas. Soon enough people find they have similar ideas, and social networks, such as Facebook, facilitate the forming of groups as well as the planning of protests. The Occupy Movement was fully organized through social networking, and propelled global movement.

Another prime example is Egypt, which learned quickly through news and social media sites of Tunisia’s successful demonstrations to overthrow a president, who had been in office for over decades. Soon the Egyptians followed suit, and succeeded to overthrow President Hosni Mubarak.

The problem of its effectiveness

Social justice and government must coexist. But how much government power is just right before it affects the rights of its citizens? This is the reason for most of the recent protests. If a country succeeds to overthrow a president, demonstrators will continue to protest any cause they find relevant simply because they found their method to be effective the first time.

For instance, a new president was soon elected in Egypt, yet demonstrators against his presidency managed to remove him from office. Last month, Adly Mansour, who is a former judge and Egypt’s interim president, passed a law forbidding protests unless approved by the government in order to put a stop to all unannounced mass meetings. Mansour claims the law is a preventative measure, since many have been killed and congestion in the streets has begun to affect daily life in major cities. However, the law requires getting approval from 7 different governmental groups before being granted the right to protest, making many skeptical that the freedom they fought for is being revoked.

One thing is certain: the voice of the people is finally being heard throughout the world.