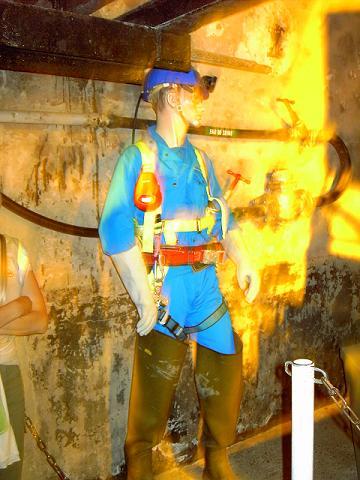 If the Ninja Turtles were ever to go to Paris, where would be the first place they’d visit? Chances are that before taking in some vin chaud, smoke, and chanson française at Le Chat Noir, before rummaging for bargains through piles of spare bike parts and 15th century furniture at Les Puces de Montreuil, or before dancing the tango along the Seine on the Quai Saint Bernard to the slinky exhalations of a live accordion, they’d zip right past the Eiffel Tower, down the Champs Elysées, and over into the 7th arondissement where the entrance to Les Egouts de Paris is found.

Some go to Paris in a quest for love, and others are less ambitious. For those eager to explore the least traditional, most putridly unromantic aspects of the hexagon’s capital city, Les Egouts de Paris, or the Parisian Sewer System, is the perfect destination.

Though French history reverberates from the balconies of the Opéra Garnier, resounds in the august halls of the Panthéon, and roars from the mouths of gargoyles, posed for centuries on the sinewy steeples of Notre Dame, some of the city’s most fascinating history also rots 500 meters below street-level.

A city that has as much opulence as it does feculence, there are over 1250 miles of underground sewage piping in Paris. In the mid 1800’s when all of Paris was undergoing a major renovation, architectural plans were also laid out for the city’s new sewers. In attempt to improve sanitation, Baron Haussmann, the Parisian civic planner known for his vision of the wrought iron gas lamps and wide boulevards that have become the city’s trademark saw that meticulous sewage plans were drawn out.

Today, tourists can navigate the grotto-like passageways of the sewers, posing with ancient poop-scooping paraphernalia including the boules de curage, or giant sand-filled balls once used to flatten out waste so that it would more easily flow through pipes. There is also a small museum dedicated to Victor Hugo, showing how accurately he portrayed Jean Valjean’s journey with Marius through the sewers in the classic, Les Misérables. Hugo saw the sewers as the one honest and equalizing force in the city; a place where class distinctions were irrelevant and there were no secrets—all of man’s vices, his beer bottles, his filth, his waste—were clearly displayed in the sewers.

A few Wallace drinking fountains are also on display in the sewers, with explanations as to why the four statues of goddesses suspending the roof of the fountain are no more than six inches apart from each other. A passing tour guide might also be friendly enough to share the evolving ratio of Parisians to rats living in the sewer system.

From its boulevards to its bowels, Paris offers mounds of history to discover.