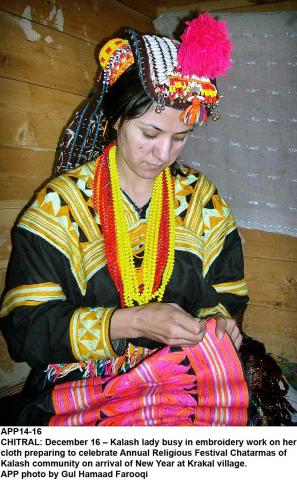 CHITRAL: Two Kalash girls were converted to Islam at Bumborate (Kalash valley). According to Nazim Union council Ayun (Kalash valley) Rahmat Elahi and Wazir Zadar Chairperson Human rights Monitoring committee Kalash valley Shahzia daughter of Mir Jinnah of Brone village was converted to Islam she is a student of 2nd Year. And Aasti Gul daughter of Noorshali resident of Drazlown converted to Islam. Elites and elders of Kalash community considered it a thread toward Kalash culture while the Muslims community highly hailed and welcome their act regarding embracing Islam. While on the other hand elders of Kalash community are in the opinion that conversion of Kalash people to Islam is a high thread toward this unique culture and community having thousands of year old history.

CHITRAL: The most unique  community of the world having unique culture, unique traditions, customary,  different methods of religious worship Kalash community celebrating their annual religious festival of Chatarmas.  Kalash ladies preparing traditional food, bread (mixing walnut inside the bread) and cooked on fire which are distributing among their relatives and neighbors.  Young girls singing songs and presenting traditional folk dance and visiting house to house. Young boys and girls distributing traditional food and walnut mixed bread early in the morning among their relatives and neighbors.  Kalash people also prepare statue (portrait just like on the shape of wild animal) from flour and mixing (crushed) walnut  inside it and cooked it by fire. They believe that these statue and shapes of animal prepared from flour are causing for the rest of soul of wild animal as their religious holy relics. They also sacrifices animals but during slaughtering these animal by selves they not allow any Muslim or outsider during 3 days. The festival will be ended on 22nd December a large number of people were attending these festivals in past but due to kidnapping of a Greek volunteer from Bumborate recently there was no foreigner tourist seen in the valley.

The most unique nation of the work Kalash community celebrating their annual festival of Chatarmas.

CHITRAL:   The most rare and unique nation of the work Kalash tribes dwelling in the three tucked away valleys Rumbor, Birir, Bumborate of Chitral district are celebrating their winter religious festival the chitr Mas also known as the chow mas. The festival will continue into the next weeks climaxing on the day of the winter solstice. Wikipedia describes the festival as:

The most important Kalash festival is the Chaumos (cawmos, ghona chawmos yat, Khowar "chitrimas" from *caturmasya, CDIAL 4742), which’s celebrated for two weeks at winter solstice (c. Dec. 7-22), at the beginning of the month chawmos mastruk. It marks the end of the year’s fieldwork and harvest. It involves much music, dancing, and the sacrifice of many goats. It’s dedicated to the god Balimain who’s believed to visit from the mythical homeland of the Kalash, Tsyam (Tsiyam, tsíam), for the duration of the feast. Food sacrifices are offered at the clans’ Jeshtak shrines, dedicated to the ancestors.

At Chaumos, impure and uninitiated persons aren’t admitted; they must be purified by a waving a firebrand over women and children and by a special fire ritual for men, involving a shaman waving juniper brands over the men. The ‘old rules’ of the gods (Devalog, dewalok) are no longer in force, as’s typical for year-end and carnival-like rituals. The main Chaumos ritual takes place at a Tok tree, a place called Indra’s place, "indrunkot", or "indréyin". Indrunkot’s sometimes Kalash Damsel believed to belong to Balumain’s brother, In(dr), lord of cattle.

Ancestors, impersonated by young boys  are worshipped and offered bread; they hold on to each other and form a chain and snake through the village.

The men must be divided into two parties: the pure ones have to sing the well-honored songs of the past, but the impure sing wild, passionate, and obscene songs, with an altogether different rhythm. This is accompanied by a ‘sex change’: men dress as women, women as men (Balumain also’s partly seen as female and can change between both forms at will).

Kalash young man Qaid e Azam told scribe  that after 17 Dec, outsider men will not be allowed to join the festival  because of exercising special religious practices of Kalash community.