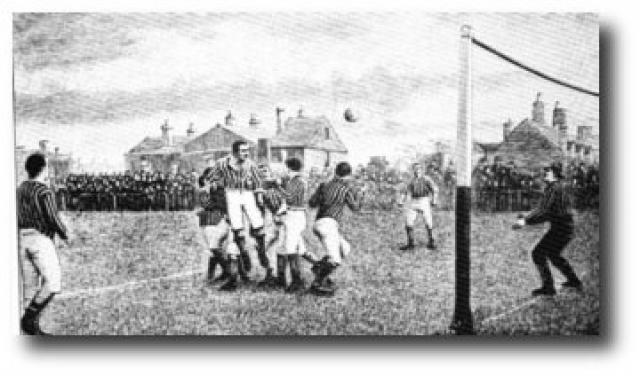 Many different cultures have played a sport similar to the modern game of soccer but no one can really say with any certainty when or where soccer began but it is known that the earlier variations of what later became soccer were played almost 3000 years ago.

One of the earliest forms of soccer in which players kicked a ball around on a small field has been traced as far back to 1004 B.C. in Japan. The Munich Ethnological Museum in Germany has a Chinese text from approximately 50 B.C. that mentions games very similar to soccer that were played between teams from Japan and China. The Chinese kicked a leather ball ( hair-filled ) and it is known with certainty that a soccer game was played in 611 A.D. in the then Japanese capital, Kyoto.

The Romans played a game that somewhat resembled modern soccer. The early Olympic games in Rome featured twenty-seven men on a side who completed so vigorously that two-thirds of them had to be hospitalized after a fifty-minute game.

While historians kept records of events such as wars and religious movements they had very little interest in preserving the various origins of soccer or many other sports, so no one can say how soccer seems to have spread from Asia to Europe.

The most popular game on earth.The King of Sports? Not according to King Edward.

In King Edward’s reign of England (1307-1327), laws were passed that threatened imprisonment to anyone caught playing soccer. King Edward’s proclamation said:" For as much as there is a great noise in the city caused by hustling over large balls, from which many evils may arise, which God forbid, we command and forbid on behalf of the King, on pain of imprisonment, such game to be used in the city future."

Evidently judged to be vulgar and indecent, soccer was at times suppressed by the English sheriffs who followed royal orders describing the game as a useless practice. King Henry IV and Henry VIII passed laws against the sport, and Queen Elizabeth I "had soccer players jailed for a week, with follow-up church penance"

Laws, however, failed to stop the sport, which had earned official sanction in England by 1681. The game became so popular by 1800s that, in certain annual contests in northern and middle England, large groups roamed and raged through towns and villages. In 1829, an account of such match in Derbyshire spoke of "broken skins, broken heads, torn coats and lost hats."

A record of the development of soccer in England shows that Eton college had the earliest known rules of the game in 1815, perhaps implying that until then, chaos was preferred over order. But order gradually came to the game, and standardized rules known as the Cambridge rules were adopted by England’s major colleges.

At 1st, it was England where soccer was originally banned, that eventually exported modern soccer to every continent in the world. today, undisputedly soccer is the most watched and played sport in the world enjoyed by 8 million people. This past World cup, that took place in the united States was watched by an estimated 33 million people around the world for almost 27 days. This makes soccer, the most watched single sports event in the world not surpassed even by the Olympics. This sport is bigger than baseball, football and basketball combined.