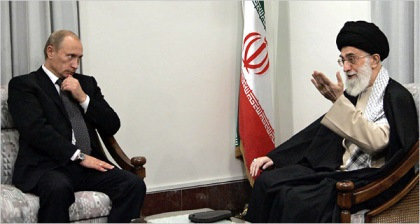 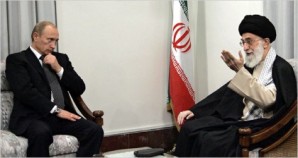 President Putin of Russia has a sit down meeting with the Grand Ayatollah Ali Hosseini Khamenei in Iran. Putin was working very hard behind the scenes to get a deal done.

On November 24, 2013 President Vladimir Putin made comment on the deal reached between Iran and the p5+1 nations regarding Iran’s uranium enrichment program.

“The talks on settling the issue of the Iranian nuclear program have brought us closer to a solution to one of the most complex problems in international politics.”

“The Geneva Accord was the result of the goodwill shown by the six nations, Iran and the European Union representatives, and the hard work of the negotiation teams. The agreement gives a balanced list of measures and will unquestionably have a positive impact on developments in the international situation, especially in the Middle East region. Russia has always stood by the principle that the Iranian nuclear program issue could be settled only through negotiations and diplomatic means. It is important that the Geneva action plan is based precisely on this idea and approach. In particular, the principles of gradual steps and reciprocity that we proposed earlier are reflected fully in the agreement and have obtained support and international recognition”, said Putin.

“The outcome of the Geneva talks is a victory for all and shows once again that collective efforts in a spirit of mutual respect can produce answers to today’s international challenges and threats”, he said.

“I stress that although this is a breakthrough, it is just the first step on a long and difficult path. Together with our partners, we are ready to continue the patient search for a mutually acceptable and broader comprehensive solution that would guarantee Iran’s inalienable right to develop peaceful nuclear energy under IAEA supervision and the security of all countries in the Middle East, including Israel”, said President Vladimir Putin (source: Kremlin transcript speech http://eng.kremlin.ru/news/6324).

Filed under: News, World
Share Tweet Pin G Plus Email
previous article: “I have made clear my determination to prevent Iran from obtaining a nuclear weapon”, said President Obama
next article: Deal between Iran and P5+1 nations “is just the first step on a long and difficult path’, said Putin