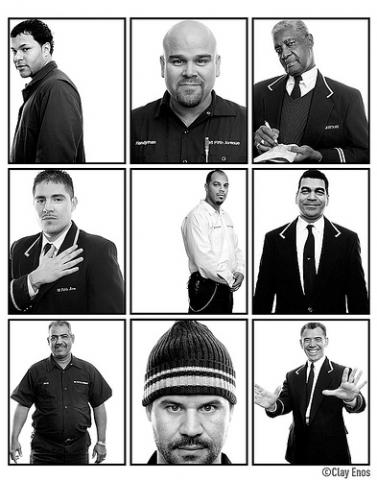 Eight years ago, Victor Velez was hired as the full-time doorman at 50 Park. Though his job didn’t require it, Velez consistently wore his navy blue, burgundy and gold embroidered hat, and even bought himself a set of white gloves to sharpen his attire.

"The effect of the gloves was crazy," Velez said. People loved it, and that Christmas, I made $1500 more in bonuses than the previous year." That holiday season, Velez sent thank you notes to all of the tenants in the building and signed them G.M., Gloveman.

Velez is six foot something with a large frame that contrasts the subtle rectangular shaped garnet adornment in his left ear. Not all tenants are crazy about the earring, but it matches the permanent twinkle in his eye, so they let it slide. He is consistently gregarious, often greeting tenants with a knuckle to knuckle salute, or for the older ones, a respectful yet ebullient swoop of the front door.

Nothing gets past Velez. His eyes actively size up the barcodes on every passing car, person, and animal, including Ben, the mouse that lives under the planter at 50 Park. "It’s the porter’s job to kill the mice, but since I’m the doorman, I can be his friend."

Though 32BJ, the union which Velez belongs to, offers free training in computer programming, building administration, and various technical skills, Velez is perfectly content where he is. "This is the happiest job I could ever have," he says, earnestly, his white-gloved hands enthusiastically echoing his words, "I’m gonna do this for another 20 years."

Velez has become a neighborhood staple. "I feel much safer just knowing that he’s here," said a female tenant of the building. "He watches out for everyone in the area."

"I can’t walk past here with my dog without stopping," said a neighboring tenant whose dog, Rocket once swallowed Velez’s gloves while playing with him and was sick for three days until he threw them up.

Velez has recently purchased a new apartment of his own in the Riverdale section of the Bronx. It’s not quite 50 Park, but it has various elements of his workplace, namely the the sundry furnishings that building tenants discard.

"I’ve furnished half my apartment with stuff that people throw out. I got an air conditioner, tables, chairs, mirrors — I have lamp all wrapped up in the basement and ready to take home when I get off" Velez said, happily pointing to his car, a white Buick with 80,000 miles on it that he had purchased three years ago from a tenant for $500.

Not only does Velez’s new pad have the trappings of a Park Avenue pad, it also has some of the same luxuries, including its very own uniform-wearing doorman.

"It’s so weird having people opening doors and pushing elevator buttons for me!" Velez said.

"My superintendent found out that I was a Park Avenue doorman, and now every time he sees me, he teases the doorman about me trying to take his job."

And Velez’s superintendent may not be wrong. Velez so enjoys being a doorman that he’s thinking of applying for a part-time position in the new building being constructed right next to the one he’s moved into. “I could walk to work!” he said, exuberantly.

Regardless of the new job, Velez would never leave 50 Park. He works everyday from 3 to 11pm, except on Tuesdays and Sundays, his days off. In his spare time, he can be found salsa dancing, working out (Velez is 44, has two children and two grandchildren, but doesn’t look a day over 30), or playing poker and handball with tenants of the building.

Though Velez is very excited about his new apartment and has already submitted his resumé for the second job, he said he is still adapting to the novelty of his living conditions.

“It’s going to take time to get used to, but at least I’m a very good tipper.”


Be generous to your doorman this holiday season!