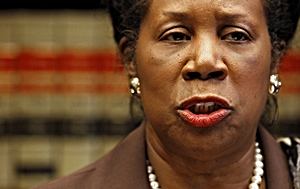 On September 28, 2013 Rep. Jackson Lee of Texas asked for and was granted permission to address the United States House of Representatives for one minute regarding the government shutdown by Republicans.

“I hope that the backdrop of the U.N. resolution that dealt with 15 countries that stood together to bind themselves against Syria’s holding of chemical weapons may be an example for the coming together of this body. Something historic happened because people listened to each other. I hope that as we move towards some mode of peace, as we work to reconcile the terrible violence in Syria, the killing of Syrians, we first ensure that those chemical weapons do no harm to anyone in this world”, she said.

“I hope the Republicans can listen and understand that it is always the other person’s interests that should be promoted and put first. That is to say, this Nation must fund itself and we must pay our bills. A good lesson, for once, from the United Nations. We all would do well to understand that we can work together”, said Rep. Jackson Lee (source: Congressional Record http://thomas.loc.gov).

In addition Congresswoman Jackson Lee is a member of over 45 Congressional Member organizations, including:

Filed under: News, Politics
Share Tweet Pin G Plus Email
previous article: “This Nation must fund itself and we must pay our bills”, said Rep. Jackson Lee
next article: A feisty Rep. Jackson Lee takes Republicans to task in Congress