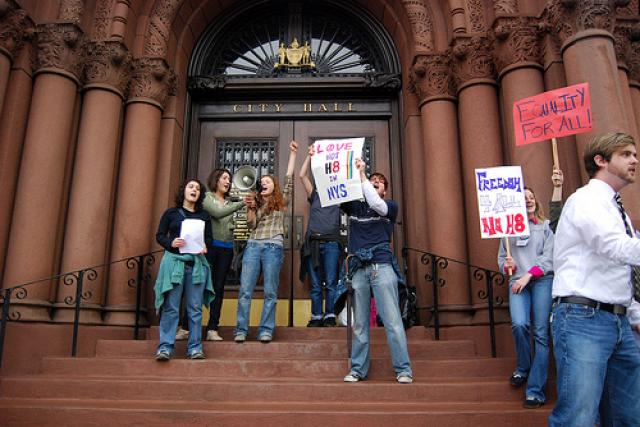 by Rachel Balik
Vermont and Iowa have legalized gay marriage and the Washington, D.C Council has voted to recognize gay marriages performed elsewhere, suggesting that anger about Prop 8 has galvanized gay marriage supporters to carry on the fight.

A Wave of Support for Gay Unions

In a preliminary vote, the Washington, D.C. Council voted on Tuesday, April 7 to recognize same-sex unions from other states within the District of Columbia.  The vote was unanimous, except for one absent member, leading representative David A. Catania to say that he believes legalization of gay marriage may be in the future for D.C. All the decisions in the District are up for review by Congress, and opponents could petition Congress to reverse it.  But gay-marriage advocacy groups says that if Congress tries to intervene, Washington will become a significant “battleground” on the issue.

A final vote is to take place on May 5. Supporters believe that this is first step is paving away for the official legalization of gay marriage in the district.

That same day, Vermont voted to legalize gay marriage, the fourth state to do so and the first to do so by legislative vote. The vote came nine years after Vermont became the first state to legalize civil unions. Gov. Jim Douglas had vetoed the gay marriage bill. The Burlington Free Press writes that he felt it to be an unnecessary distraction in a time of economic crisis and that legalizing gay marriage in Vermont was pointless, given that federal and other states’ laws still don’t recognize same-sex marriages. The Vermont legislature voted to override his veto, however; the vote was 23-5 the state Senate and 100-49 in the House.

Meanwhile, on April 3, the Iowa Supreme Court overturned a gay marriage ban, calling it unconstitutional. The unanimous vote still permits churches to decide who can be married under their roofs, the Des Moines Register reports. The difference between civil unions and marriage is also discussed; part of the ruling indicated that limiting same-sex couples to civil unions would be a form of discrimination.

The case originated in 2005 with a lawsuit filed by six gay couples, and is particularly remarkable given Iowa’s location in the country; it is the first state in its region to make a ruling in favor of gay marriage.

Sources in This Story

Background: Building Momentum in the Wake of Prop 8

When Proposition 8 passed in the November 2008 election, undoing the California Supreme Court’s decision to legalize gay marriage in May of that year, the reaction was explosive. People organized protests and mobilized to fight the ban in court. Since Proposition 8 passed by a very close margin, people analyzed why the vote turned out the way it did. Blame was placed on a variety of factors but one thing was clear: supporters of gay marriage would need to be more proactive. Rob Epstein for The Huffington Post suggested looking at the campaigns of Harvey Milk and devoting more energy to community outreach.

To that end, 2009 has meant a big push for gay marriage in numerous states throughout the country. Activists in Minnesota, California and Arizona began initiatives for gay marriage, including long-term education projects to increase public awareness of the issue.